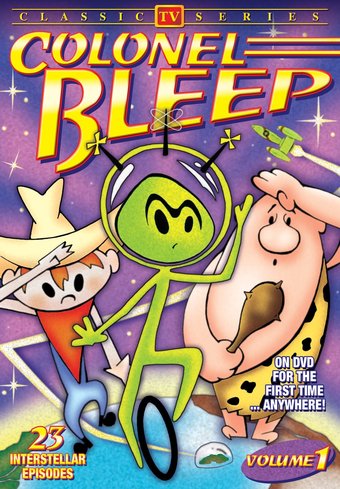 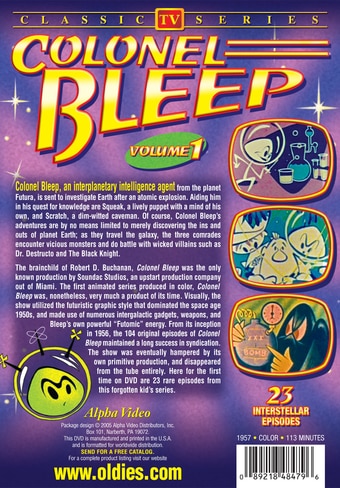 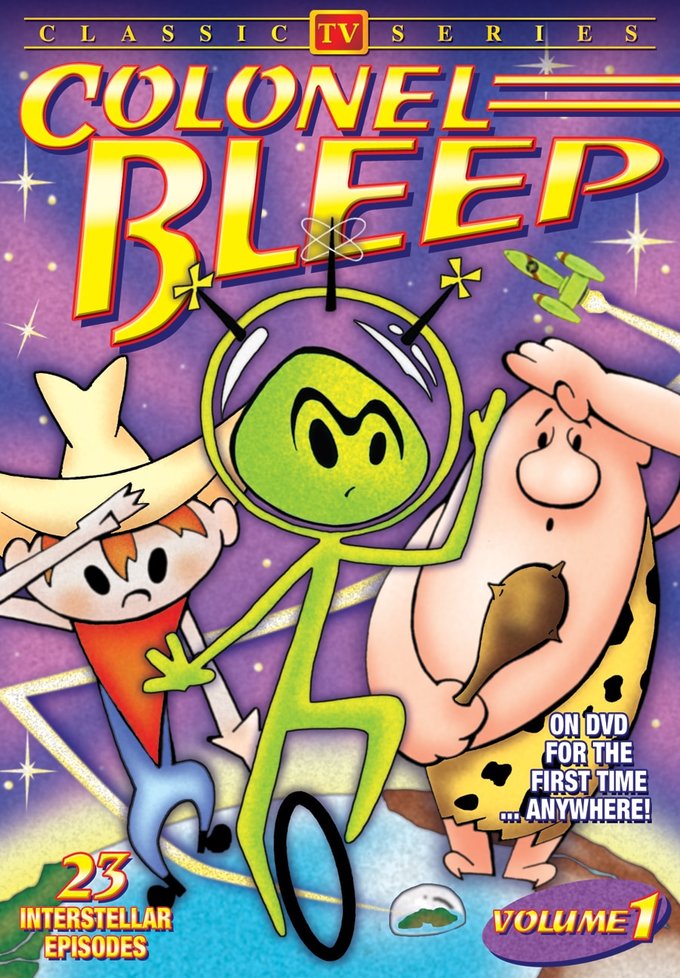 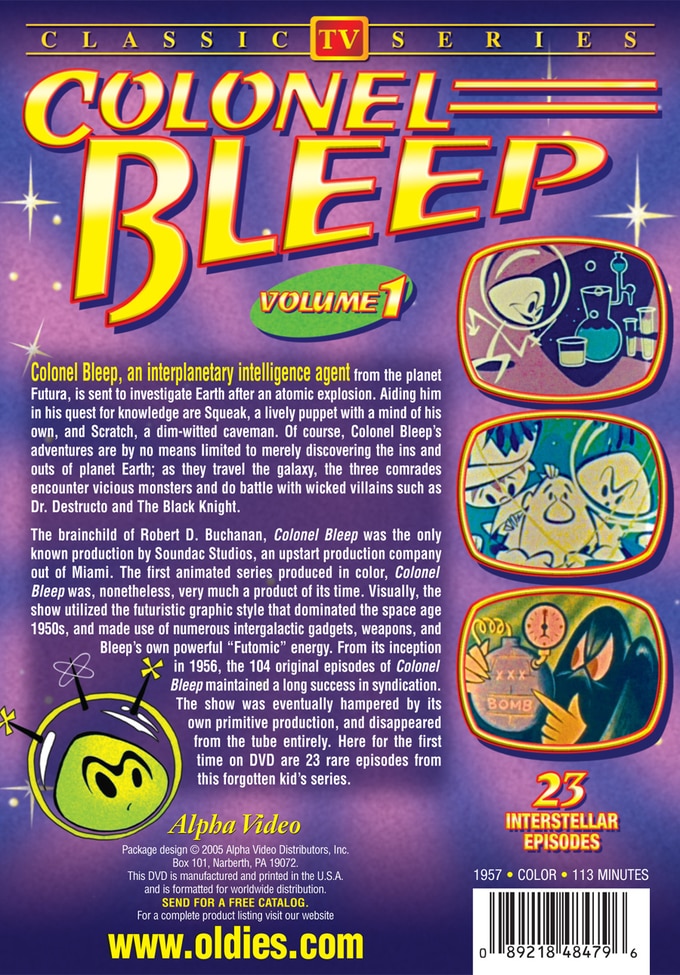 Colonel Bleep, an interplanetary intelligence agent from the planet Futura, is sent to investigate Earth after an atomic explosion. Aiding him in his quest for knowledge are Squeak, a lively puppet with a mind of his own, and Scratch, a dim-witted caveman. Of course, Colonel Bleep's adventures are by no means limited to merely discovering the ins and outs of planet Earth; as they travel the galaxy, the three comrades encounter vicious monsters and do battle with wicked villains such as Dr. Destructo and The Black Knight.

The brainchild of Robert D. Buchanan, "Colonel Bleep" was the only known production by Soundac Studios, an upstart production company out of Miami. The first animated series produced in color, Colonel Bleep was, nonetheless, very much a product of its time. Visually, the show utilized the futuristic graphic style that dominated the space age 1950s, and made use of numerous intergalactic gadgets, weapons, and Bleep's own powerful "Futomic" energy. From its inception in 1956, the 104 original episodes of "Colonel Bleep" maintained a long success in syndication. The show was eventually hampered by its own primitive production, and disappeared from the tube entirely. Here for the first time on DVD are 23 rare episodes from this forgotten kid's series.

Includes the following episodes (sorted alphabetically, not in order of appearance on DVD):

An early TV superhero, Colonel Bleep was originally part of the animated diet of children's television shows that lit up Saturday mornings in the 1950s. Bleep and his cohorts were based on earth, and fought off a variety of villainous characters from the outer reaches of the Universe, many of whom had dastardly plans to take over the world.

Animation | Series | Classic Television
This product is made-on-demand by the manufacturer using DVD-R recordable media. Almost all DVD players can play DVD-Rs (except for some older models made before 2000) - please consult your owner's manual for formats compatible with your player. These DVD-Rs may not play on all computers or DVD player/recorders. To address this, the manufacturer recommends viewing this product on a DVD player that does not have recording capability.

Colonel Bleep Lives On! Movie Lover: Pecos Kid from The Bijou,Hollywood US -- December, 23, 2008


Fellow movie lover Mark Dillman hit the nail on the head when he talked about watching Col Bleep in the days before he attended kindergarten. That was really the target audience for Colonel Bleep, pre-schoolers, and its interesting to view Colonel Bleep as the Barney the Dinosauer of its day. It delivered to that audience, with colorful graphics and gentle stories. Was Colonel Bleep the first friendly alien in TV history? I also note a bit of influence on Rocky and Bullwinkle with the over-the-top narration. Throw this DVD in your player, grab your space scooter and "stand by for adventure!!!!"

I watched "Colonel Bleep" on TV (in black & white, of course) in the 1950s when I was not yet old enough to go to school. I never forgot this cartoon!

The cartoons on this DVD have had little done digitally to clean up the picture and sound. Well-used films were the source here, not original negatives, for certain. Until something more definitive comes out, this DVD will be the one to have.