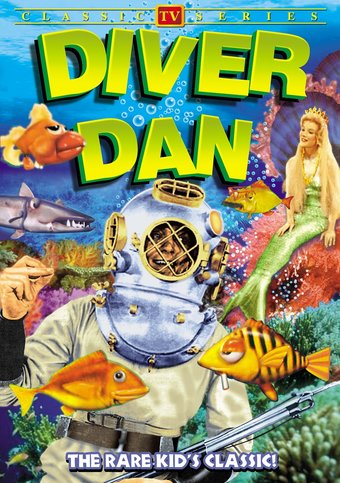 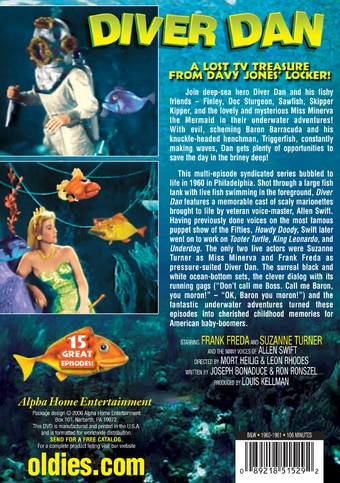 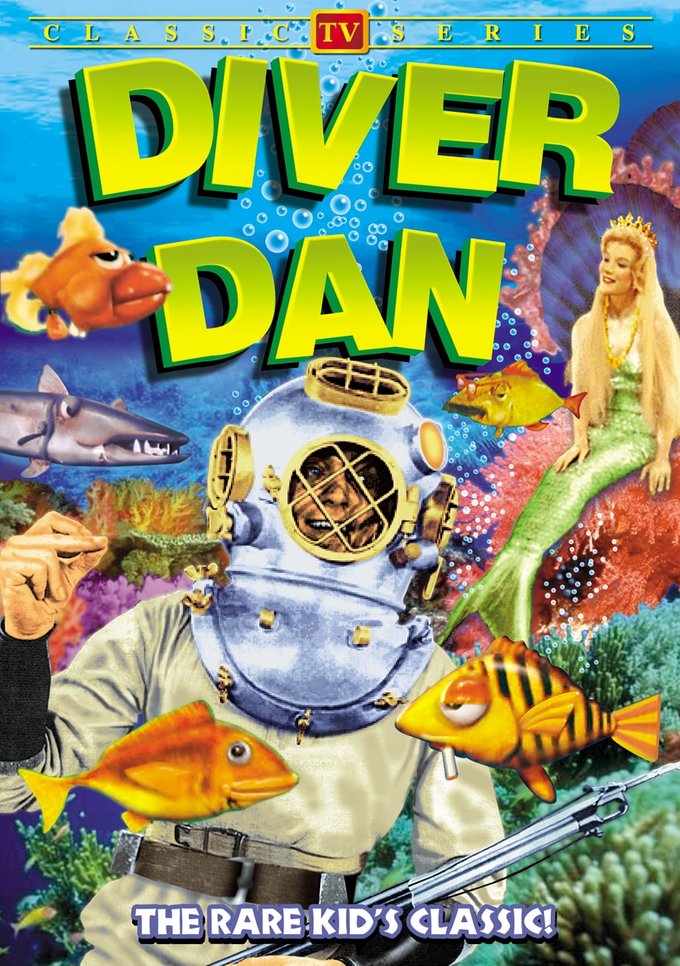 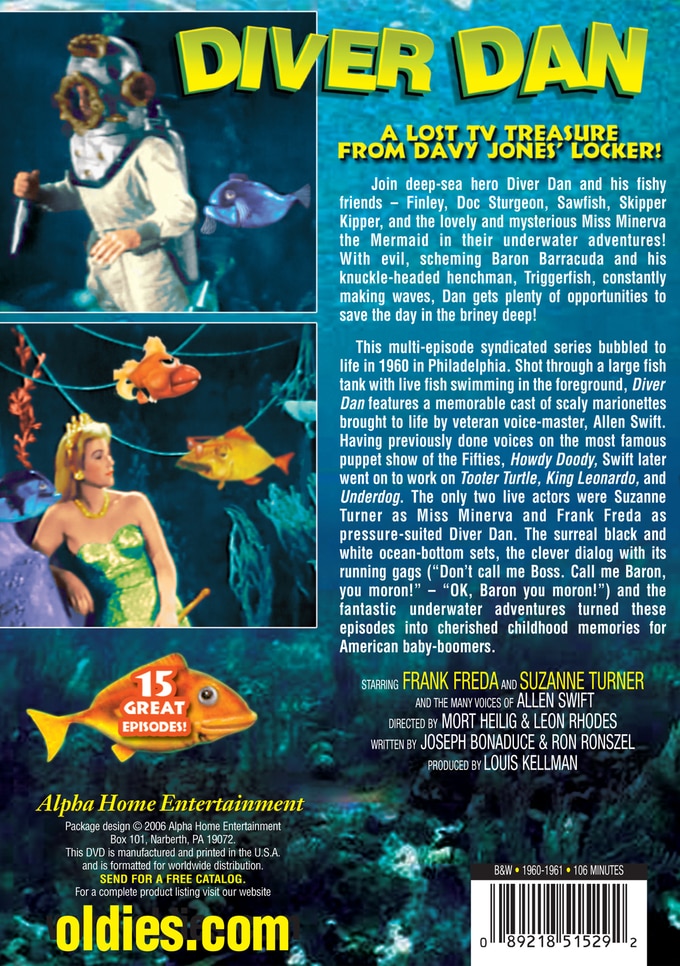 Join deep-sea hero Diver Dan and his fishy friends - Finley, Doc Sturgeon, Sawfish, Skipper Kipper, and the lovely and mysterious Miss Minerva the Mermaid in their underwater adventures! With evil, scheming Baron Barracuda and his knuckle-headed henchman, Triggerfish, constantly making waves, Dan gets plenty of opportunities to save the day in the briny deep!

This multi-episode syndicated series bubbled to life in 1960 in Philadelphia. Shot through a large fish tank with live fish swimming in the foreground, "Diver Dan" features a memorable cast of scaly marionettes brought to life by veteran voice-master, Allen Swift. Having previously done voices on the most famous puppet show of the Fifties, "Howdy Doody," Swift later went on to work on "Tooter Turtle," "King Leonardo," and "Underdog." The only two live actors were Suzanne Turner as Miss Minerva and Frank Freda as pressure-suited Diver Dan. The surreal black and white ocean-bottom sets, the clever dialog with its running gags ("Don't call me Boss. Call me Baron, you moron!" - "OK, Baron you moron!") and the fantastic underwater adventures turned these episodes into cherished childhood memories for American baby-boomers.

Adventure | Classic | Kids Adventure
This product is made-on-demand by the manufacturer using DVD-R recordable media. Almost all DVD players can play DVD-Rs (except for some older models made before 2000) - please consult your owner's manual for formats compatible with your player. These DVD-Rs may not play on all computers or DVD player/recorders. To address this, the manufacturer recommends viewing this product on a DVD player that does not have recording capability.


Trying to describe this show to those whom have never seen it makes you look like you have lost your mind. Diver Dan is real. Shot through an aquarium. The characters are fish marionettes. The evil character is a barracuda with a monocle. His name is Baron Barracuda. Oh did I mention the other live character is a mermaid called Miss.
Minerva. She is hot. Her blonde hair always covers her ample breasts just so. Diver Dan would love to get it on with her in The Saragasso
sea weed. The Baron has a hench-fish called Trigger. He always has a cigarette hanging out of his mouth. Some of the other characters are Doc Sturgeon. He wears glasses and a mustache. You can not make this stuff up. Drugs were not invented yet in 1961. They didn't even try to hide the strings or the "clacking" sound they made
from their wooden mouths. The Baron sounded like Bela Legosi. You have to see it to belive it. Tons of fun. Don't be fooled by the cover, it is in B&W. Color would have blown to many kid's minds. Who had a color TV in 1961 anyway. Rumour has it that they are coming out with a Blu Ray remastered version with behind the scenes footage. "Strings Un-Cut" (Just Kidding).


I was amazed to see this show again. I think this was broadcast as part of the Sandy Becker Show or Officer Joe Bolton's Show in the Big Apple in the early 1960's. And it is actually very clever. Frank Freda has a great voice and I think every kid on my block had a schoolboy crush on Suzanne Turner. But the puppets are the real stars. And that theme song....