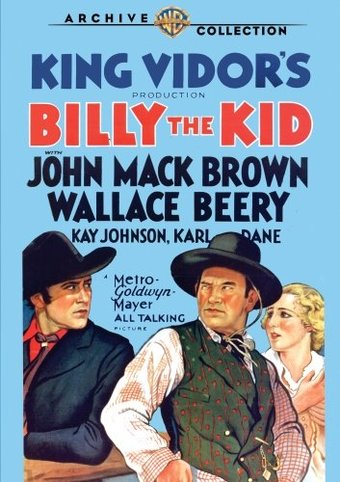 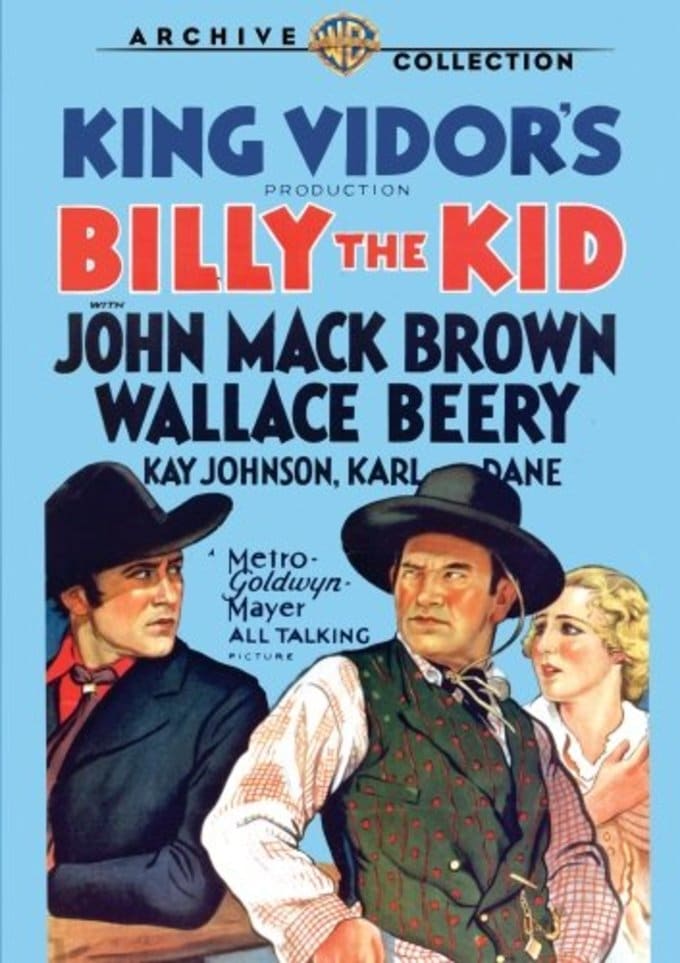 Bad blood is spilling over in Lincoln County: William Bonney has sworn revenge against the men who murdered his boss. Filmmaker King Vidor brought the bigger-than-life legend of Bonney -- Billy the Kid -- to the screen in a big way, using a rare widescreen process (unfortunately, wide prints are no longer known to exist) and filming some of the action in New Mexico locales known to the outlaw. John Mack Brown portrays the Kid, single-mindedly pursuing his vow of payback and eluding death several times (including a gun-blazing escape from a hacienda inferno). Would the Kid also elude Sheriff Pat Garrett (Wallace Beery)? The film's denouement undoubtedly delighted some moviegoers and riled others. The saddles and sidearms of a cowboy's stock-in-trade would serve Brown, then a newcomer to the Western genre, for years to come. From the mid-1930s into the 1950s, he was a mainstay of Western B-films and serials.

The tall and virile Johnny Mack Brown portrays the short and dyspeptic outlaw William Bonney, a.k.a. Billy the Kid. Wallace Beery is more effectively cast as Pat Garrett, the sheriff who's sworn to bring in Billy dead or alive despite his grudging friendship for the young killer. Hardly the "homicidal moron" described by western historians, the movie's Billy has a certain amount of charm, though he's shown to be a cold-blooded killer when the opportunity arises. The film's ending was shot twice: One ending retained fidelity to the facts by having Garrett kill Billy, while the other denouement allowed Billy to ride into the sunset, as Garrett beatifically looked on. Over the protests of western purists, the second ending was used in the American release version, though the more tragic climax was seen by European audiences. BILLY THE KID was originally released in a 70mm widescreen process called Realife; to avoid confusion with MGM's 1941 BILLY THE KID, the earlier film has been retitled THE HIGHWAYMAN RIDES for television.

Cowboys | Outlaws | Escape | Revenge | Biographical
This product is made-on-demand by the manufacturer using DVD-R recordable media. Almost all DVD players can play DVD-Rs (except for some older models made before 2000) - please consult your owner's manual for formats compatible with your player. These DVD-Rs may not play on all computers or DVD player/recorders. To address this, the manufacturer recommends viewing this product on a DVD player that does not have recording capability.

The Stork Club
$10
Add to Cart