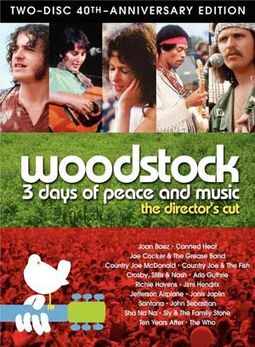 An intimate look at the Woodstock Music & Art Festival held in Bethel, NY, in 1969, from preparation through cleanup, with historic access to insiders, blistering concert footage, and portraits of the concertgoers. Negative and positive aspects are shown, from drug use by performers to naked fans sliding in the mud, from the collapse of the fences by the unexpected hordes to the surreal arrival of National Guard helicopters with food and medical assistance for the impromptu city of 500,000.

1969 was a year unlike any other. Man first set foot on the moon. The New York Mets won the World Series against all odds. And for three days in the rural town of Bethel, New York, half a million people experienced the single most defining moment of their generation - a concert unprecedented in scope and influence, a coming together of people from all walks of life with a single common goal: Peace and music. They called it WOODSTOCK. One year later, a landmark Oscar-winning documentary captured the essence of the music, the electricity of the performances, and the experience of those who lived it. Newly remastered, the film features legendary performances by 17 best-selling artists.

Michael Wadleigh's WOODSTOCK: THREE DAYS OF PEACE & MUSIC finds the best rock stars of the 1960s performing at the historic Woodstock Music and Art Fair, the most celebrated rock concert of all time. Shot over the course of three days in August 1969, the film conveys the unique spirit of the once-in-a-lifetime, communal event, and in turn, captures the mood of an entire era. Amazingly volatile, electrifying performances are included by such timeless artists as Richie Havens; Joan Baez; The Who; Sha Na Na; Joe Cocker; Country Joe and The Fish; Arlo Guthrie; Crosby, Stills and Nash; Ten Years After; Santana; Sly and the Family Stone; Jimi Hendrix; Canned Heat; John Sebastian; Jefferson Airplane; and Janis Joplin. In addition to the music, the film's historical relevance is what makes it such an important time capsule, thrillingly eternalizing the legendary event for generations to come.

This digitally remastered, widescreen director's cut of the Academy Award-winning documentary features 40 minutes of footage not included in the original film, and was released in celebration of the 25th anniversary of the legendary music festival.