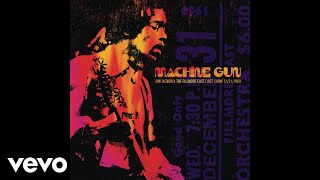 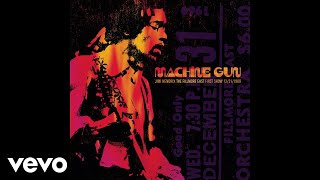 Personnel: Jimi Hendrix (vocals, guitar); Buddy Miles (drums, background vocals); Billy Cox (background vocals).
Liner Note Author: David Fricke.
Photographers: Jim Cummins; Alan Herr.
Well, this is something serious Hendrix collectors have been waiting for. Band of Gypsys famously played a total of four shows 12/31/69 and 1/1/70 at the Fillmore East (two shows each night). This is the complete first set from the first night; their debut live show. Although the original Band of Gypsys album was compiled from the second night, it wasn't because there weren't amazing performances to choose from on the first night. The first couple songs are a bit rough around the edges, but when Jimi goes deep blues with "Hear My Train a Comin'," he really starts feeling it and turns in an absolutely amazing version (that's why it was previously released on Band of Gypsys 2 and Live at the Fillmore East). "Machine Gun" is another stunner. There are significant differences to the lyrics, and the structure of the song is different as well (Billy Cox says both Jimi and Buddy Miles were doing things that weren't done in rehearsals). "Bleeding Heart" is another amazing blues performance leading into two songs that were almost never performed live: "Earth Blues" and "Burning Desire." Throughout the set, the band is absolutely locked in. They aren't just playing; they're clearly listening to each other and Hendrix turns in some scorching guitar. The most interesting thing might be the realization of how much of these sets and songs was improvised by the band, as shown by the differences in "Machine Gun" from night to night. Eddie Kramer deserves credit for a truly excellent mix (and probably some judicious editing on "Changes"). It's not really fair to compare Machine Gun to Band of Gypsys since one is a largely unedited complete performance and the other is the best cuts selected from a couple shows. That said, there are performances here that rival those of the original Band of Gypsys album, and hearing Jimi on his game with great sound will always be welcomed. ~ Sean Westergaard