Legends of Rock and Roll: The Beatles Explosion / Elvis Through the Years (2-DVD)
by The Beatles / Elvis Presley 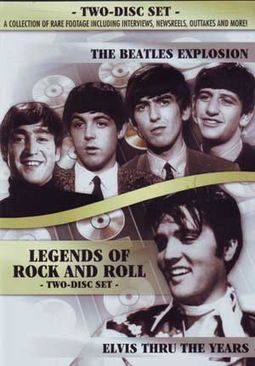 See how it all began for two of the music industry's most popular and influential acts of all-time in this two-disc documentary collection. Including rare interviews, press conferences, outtakes, comedy sketches and television appearances, this documentary collection offers an unparalleled look into the wild world of Elvis Presley and The Beatles. The Beatles Explosion: Explore the early days of The Beatles with rare interviews, newsreels, press conferences and TV appearances. This celebration of Beatlemania presents a candid look at the Fab Four, detailing their thoughts of fame, the screaming fans, and the media's fascination with their hair. The Beatles are charming, honest and clever throughout this insightful documentary film. Elvis Thru the Years: This gripping, highly entertaining documentary offers an unparalleled, behind-the- scenes look at the life of Elvis Presley. Using rare footage from his films, press conferences, outtakes, movie trailers, news clips and comedy sketches, Elvis Thru the Years is a fitting commemoration of the man who became a King and a legend.