Side 1 woodstock : music from the original soundtrack and more (Music Video) 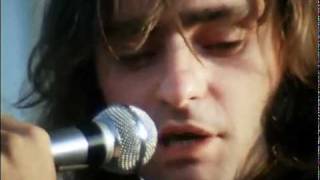 Adapter: Richie Havens.
Audio Mixers: Stan Agoi; Erol Blacstead; Dave Regno; Jack Hunt.
Audio Remasterer: Dave Schultz.
Audio Remixers: Eric Blackstead; Jack E. Hunt; Stan Agol.
Liner Note Author: Gene Sculatti.
Recording information: 1969.
Author: Eric Blackstead.
Photographers: Ken Regan; Jim Marshall ; Jason Laur‚; Henry Diltz; Burk Uzzle; Elliott Landy; Charles Harbutt.
Arranger: Jimi Hendrix.
It's almost impossible to regard the soundtrack albums for the Michael Wadleigh documentary Woodstock, simply as music, apart from the event that inspired them or what that event has come to represent. Music from the Original Soundtrack and More: Woodstock was originally released by Atlantic's Cotillion imprint as a three-LP set in a gatefold sleeve. It topped the Billboard Charts for four weeks and sold two million copies. It sold so well that Cotillion issued a sequel double album of more music from the festival that never appeared in the film. The LPs took the music out of the historical sequence of the festival and re-ordered (and edited) it for a sense of flow. Whether or not it accomplished its objective has been the subject of much debate and beyond this review's scope. What is relevant is that these performances signified via their spotty recording quality -- and sometimes dodgy performances -- that there was an amazing array of legendary talent on hand at Woodstock; though not all of it is captured here. Rhino's 2009 remastered edition of this set on a double CD is the cleanest edition yet, but even it has problems: the source tapes were problematic at best. It restores the original LP order, features new liners by Gene Sculatti, and has more photos in the booklet. Musically, the second disc sounds the least dated with its over the top performances by a shockingly great Santana with "Soul Sacrifice," Ten Years After's guitar workout on "I'm Goin' Home," Jimi Hendrix's "Star Spangled Banner" medley (still a stunner after all these decades); the Jefferson Airplane's rocking and raucous version of "Volunteers," and the orgiastic Sly & the Family Stone medley that includes "Dance to the Music," "Music Lover," and an insanely great "I Want to Take You Higher." There is some filler as well thanks to a drippy John Sebastian track called "Rainbows All Over Your Blues," and an indulgent "Love March" by an out-of-their-prime Butterfield Blues Band.
Disc one is more complex. There are some fine moments here, especially the CS&N and CSN&Y tunes, including "Suite: Judy Blue Eyes" (perhaps not perfect in voice but a very inspired performance), and "Wooden Ships," with a decent if not thrilling "Sea of Madness," in between. There is a desultory "We're Not Gonna Take It" from the Who that is out of context, given they performed the entirety of Tommy. While Canned Heat's "Goin' Up the Country" has aged well, Country Joe & the Fish's "The "Fish" Cheer/I-Feel-Like-I'm-Fixin'-To-Die Rag" has not, nor has Joan Baez's performance of "Drug Store Truck Drivin' Man." Her version of "Joe Hill" is generic. Richie Havens' "Freedom" is still thrilling, especially since it is preceded by Sebastian opening the entire set up with another duller-than-dull "I Had a Dream." The "Summer of Love" had been over for two years by the time Woodstock took place, and riots in Watts, Detroit, Newark, and other places had occurred, as well as an escalation in the Vietnam War. The most out of place thing here is Sha Na Na's "At the Hop," which sounds surreal but ragged and right, and Joe Cocker's "With a Little Help from My Friends," that closes disc one; it's electrifying if rather out of tune. So as it stands, Woodstock is a wildly mixed bag, and not particularly pleasant to listen to, but it does indeed have a significant place in the rock pantheon and should be regarded more as an artifact than as an album in its own right. ~ Thom Jurek

25%off
Jefferson Airplane
The Best of Somebody To Love (CD)
$5.98 CD Sale
Add to Cart

49%off
Woodstock Generation: Let The Sunshine In (Import)
$6.10 CD Sale
Add to Cart