A man went looking for America and couldn’t find it anywhere ... 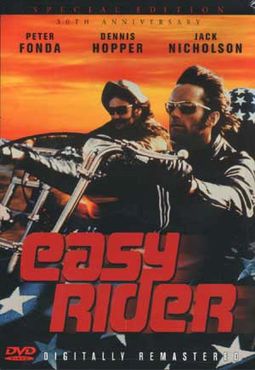 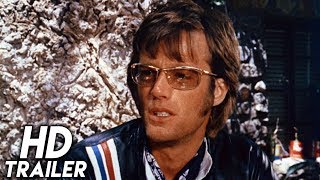 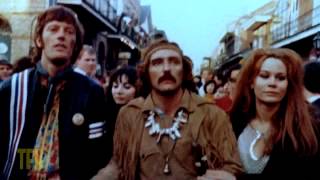 "You know, Billy, we blew it."
- Wyatt (Peter Fonda) to Billy (Dennis Hopper)

Experience the real, uncensored '60s counterculture in this compelling mixture of drugs, sex and armchair politics. Academy Award-winner Jack Nicholson stars with Peter Fonda and Dennis Hopper (who also directs) in this unconventional classic which Time magazine hails as "one of the ten most important pictures of the decade."

A landmark in film history, EASY RIDER blew the studio doors open for more young directors than any film before or since, helping to create the wide-open climate that would lead to the production of many outstanding films in the 1970s. As its director, Dennis Hopper is usually given the lion's share of credit for the film's success, but the revelations of time suggest that the contributions of the late Terry Southern and, to some degree, Jack Nicholson have endowed the film with much of its residual power.

Starring Peter Fonda as Wyatt (alias Captain America) and Hopper as Billy, it traces the hippie duo's adventures as they mount their seriously chopped hogs on a journey to find the real America en route to Mardi Gras. In Arizona, they visit a commune whose members are having a tough time, and in a small Texas town they're jailed for joining a parade. But they're quickly sprung by an ACLU lawyer, the quirky, hard-drinking George Hanson (Jack Nicholson), who accepts their offer to join them on the trip to New Orleans, eager to visit the best whorehouse in the South. EASY RIDER accurately reflects the tensions and hostilities of the period, Laszlo Kovacs's photography is superb, Nicholson is exceptional in his breakthrough role--and the startling, stunning ending is a shocker.

This landmark film stars Peter Fonda and Dennis Hopper as Wyatt (alias Captain America) and Billy, respectively. After closing a big-time coke deal in L.A., the two bikers head their hogs east, trying to discover the real America on the way to Mardi Gras. On the way, they cruise Monument Valley, spend some time at a commune, get thrown in jail, and try to deal with the negative vibes their hippie regalia provokes in most of the citizenry.
Directed by Dennis Hopper at the age of 31 for a mere $340,000, this film went on to make multiple millions and change the pop culture landscape. This often-imitated-but-never-duplicated movie defined a generation and has a great soundtrack (featuring the Byrds, the Band, Steppenwolf, Jimi Hendrix, the Electric Prunes, and more). Record producer Phil Spector is also featured in the film, and late novelist Terry Southern (THE MAGIC CHRISTIAN) collaborated with Hopper and Fonda on the script. The film also features a riotous turn by Jack Nicholson.