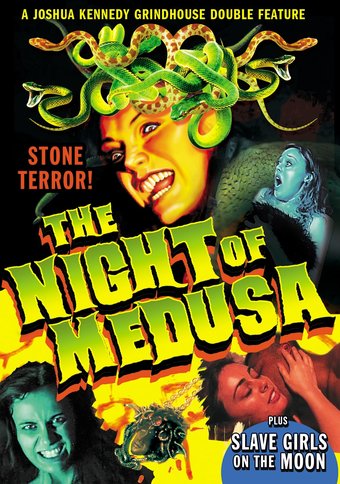 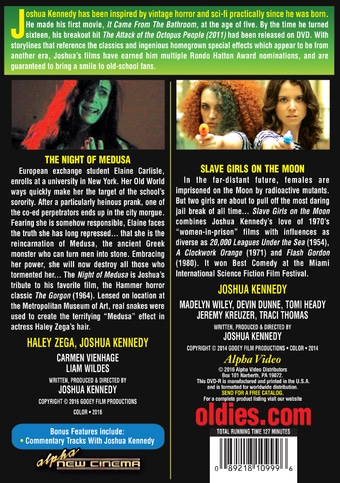 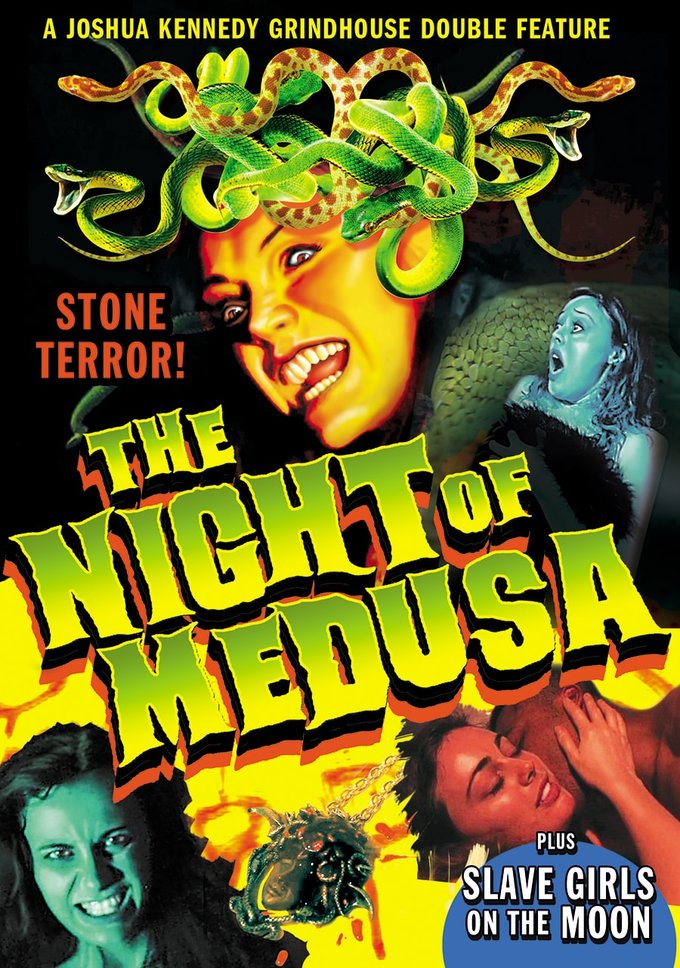 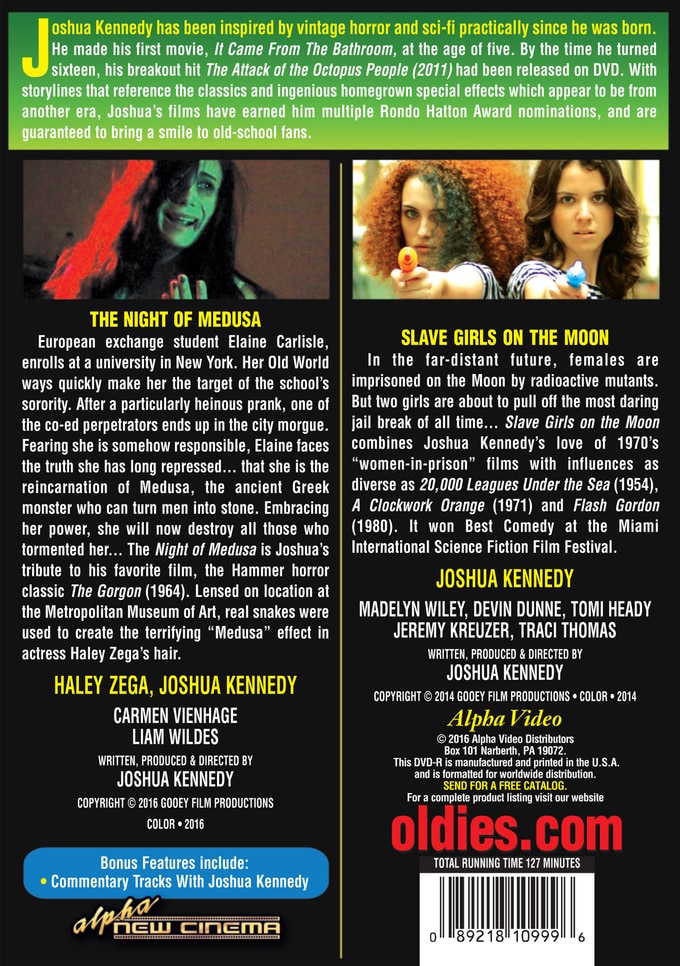 Joshua Kennedy has been inspired by vintage horror and sci-fi practically since he was born. He made his first movie, It Came From The Bathroom, at the age of five. By the time he turned sixteen, his breakout hit The Attack of the Octopus People (2011) had been released on DVD. With storylines that reference the classics and ingenious homegrown special effects, Joshua's films appear to be from another era, and are guaranteed to bring a smile to old-school fans. A multiple Rondo Hatton Award-nominee, Joshua is currently the face of Pace University's film program, where he crafted The Night of Medusa and Slave Girls on the Moon.

The Night Of Medusa (2016): Exchange student Elaine Carlisle, fresh off the plane from Greece, enrolls at a university in New York. Her Old World ways quickly make her the target of the school's fraternity. After a particularly heinous prank, one of the co-ed perpetrators ends up in the city morgue. Fearing she is somehow responsible, Elaine faces the truth she has long repressed ...that she is the reincarnation of Medusa, the ancient Greek monster who can turn men into stone. Embracing her power, she will now destroy all those who tormented her...The Night of Medusa is Joshua's tribute to his favorite film, the Hammer horror classic The Gorgon (1964). Lensed on location at the Metropolitan Museum of Art, real snakes were used to create the terrifying "Medusa" effect in actress Haley Zega's hair.

Slave Girls On The Moon (2014): In hopes of preventing nuclear war, brilliant (and gorgeous) female scientists Chloe Trustcott and Genevieve Fonda develop a time machine. But the device malfunctions, and Genevieve is catapulted into the far-flung year 8888. Following her colleague through the time portal, Chloe discovers a bizarre future civilization in which all healthy young women have been quarantined on the Moon. She finds Genevieve in this lunar prison, which is fiercely guarded by deranged radioactive mutants. With the help of the other nubile inmates, the girls pull off the most daring jail break of all time...Slave Girls on the Moon combines Joshua's love of 1970's "women-in-prison" films with influences as diverse as 20,000 Leagues Under the Sea (1954), A Clockwork Orange (1971) and Flash Gordon (1980). It won Best Comedy at the Miami International Science Fiction Film Festival.

25%off
Spacebabes Meet The Monsters
$5.95 on Sale
Add to Cart


At first glance it would seem that the two films on this disc have no reason to be paired with one another...but the wildly different films show off the range of writer/director/producer/star Joshua Kennedy. "The Night of Medusa" isn't just a rehash of Josh's favorite film, "The Gorgon"--it's a moody and moving story which delves into the real-life horrors of social media shaming and the pain of not fitting in. Haley Zega gives a touching performance in the lead role, and Carmen Vienhage does a memorable turn as the tale's real "monster".
"Slave Girls On The Moon" is a wild, wacky homage to 1970s exploitation, with Mr. Kennedy lording it over a bevy of young damsels on a Lunar prison! If you get this make sure you listen to both of Josh's commentaries--they're funny, informative, and a great way to find out how personable and entertaining Josh really is. This double feature is way more fun that any big-budget blockbuster playing at your local theater right now!

NIGHT OF MEDUSA AND SLAVE GIRLS ON THE MOON Movie Lover: MICHAEL HOUSEL from TRENTON, NJ US -- May, 30, 2016


I can't help but praise Joshua Kennedy's filmmaking finesse, especially the loving manner in which he recaptures the Gothic essence of Hammer Studios. He did a marvelous job in his homage, "Dracula A.D. 2015" and flavored his science-fiction opus, "The Vesuvius Xperiment" with many of the studio's finest traits.

Now, Gooey Film Productions brings us Kennedy's "The Night of Medusa": a heartfelt homage to Hammer's atmospheric classic, "The Gorgon". The latter is a Kennedy favorite, but instead of merely rehashing a film he holds near to his heart, he's distinguished his tribute with spellbinding friction and ample angst. The story focuses on a Greek exchange student, Elaine Carlisle (Haley Zega), who upon entering prestigious Pace University encounters unfounded disdain from her roommate, the snooty Courtney Ambrose (Carmen Vienhage), who has no idea that the meek Carlisle is the reincarnation of the dreaded Medusa, but then neither does Carlisle know such...at least not at first.

Before long, Carlisle experiences a series of weird, sleepwalking sessions and ultimately returns to her deadly roots to attain revenge, but she's not alone upon her terrifying trail. The mysterious and mystically stationed Count Saknussemm (played by none other than Kennedy) guides her along the maddening stretch of discovery.

I've already watched the film twice in one sitting and have a hankering to leap in again, but I suppose the same enthralling quality can be found in any Kennedy endeavor, including "Medusa'"s joyful DVD accompaniment, "Slave Girls on the Moon".

In "Slave Girls", we learn that nuclear scientist Genevieve Fonda (Devin Dunne) has bolted through time to the year 8888, where she's imprisoned in the moon-based Bestwick Penitentiary.

Fonda is tracked by her assistant, Chloe Trustcott (Madelyn Wiley), but when she, too, is captured, the duo plans an escape with fellow prisoner Mai-Ling (Tomi Heady), a combat-skilled (and later peg-legged) rebel. (Incidentally, "Medusa'"s Vienhage also plays one of the inmates, in this instance supplying an effective comedic tone.) To ensure success, the gals decide to throw a talent show to distract their sadistic warden (the brilliantly expressive Kennedy) and his "Invaders from Mars"/"Man from Planet X"-ish henchman, Lobo (the joyfully lustful Jeremy Kreuzer).

"Slave Girls" is a loving, nostalgic homage to space operas ranging from "Buck Rogers" to "Barbarella" (sprinkled with a dash of Stanley Kubrick, Jules Verne, and a generous heaping of Edward D. Wood, Jr.), but even more so, the adventure acknowledges the women-in-prison genre, popular during the '70s drive-in scene. The film's crossover elements blend remarkably well, so much so that they won Kennedy "Best Comedy" at the 2016 Miami International Science Fiction Film Festival Awards.

Don't deprive yourself of the fun; order this dandy, Kennedy double feature today!


Young filmmaker Joshua Kennedy has a name to remember as many think he's destined for great things, and two of his most recent projects are here for you to enjoy. The Night Of Medusa may be Josh's most layered film, mixing classic horror thrills with a contemporary story of an awkward young girl misjudged and mistreated by those around her. Haley Zega gives a memorable performance, and her director stages her personal drama in a gripping tale he also wrote. A special bonus is Kennedy's comedy, Slave Girls On The Moon, which features the director staging a women's prison break in the far future, with Josh himself playing the cruel warden in a tribute to James Mason's classic portrayal of Captain Nemo in 20,000 Leagues Under The Sea. Check out this great DVD which includes commentaries on both films by this talented young man.