Amazing and ambitious homemade horrors from the maker of "Attack of The Octopus People." 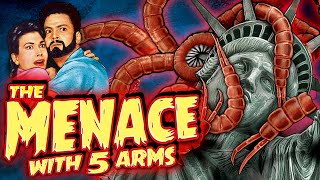 19 year old director, actor, editor, cinematographer, and special FX artist Joshua Kennedy has created more than 100 shorts and five feature length films including Attack of the Octopus People which was nominated for a 2011 Rondo Award for Best Independent Film. He has also adapted numerous feature films into stage productions including King Kong, 20,000 Leagues Under the Sea, and The Ten Commandments... where he played Moses.

The Menace With 5 Arms (2013): Sheriff Joseph Kerwin is confronted by a series of strange events that have transpired in his hometown of Santa Mira. A dozen people have mysteriously disappeared and the nearby water tower has inexplicably been destroyed. As the townsfolk panic over their lack of fresh water, Kerwin discovers unknown pieces of flesh embedded in the remains of the tower. This sparks the curiosity of marine biologist Carla Joyce who is convinced the flesh belongs to a prehistoric monster. In a spectacular finale, the creature attacks New York City and unleashes chaos with the forces of the world at bay! Starring Joshua Kennedy, Ayssette Munoz,Devin Dunne, Kat Kennedy, Jorge Chapa, Michael Rosenfeld; directed by Joshua Kennedy.

Curse of the Insect Woman (2011): In the sleepy town of Vandorf, an ancient cult has stolen a sacred stone which contains the embryo of the most feared of all legendary demons: The Insect Woman. A small group of friends learn of the plot to resurrect the creature and become cursed themselves. With the Insect Woman now at large, the locals find themselves in a race against time to discover who she is by day, and to prevent more grisly murders. Starring Joshua Kennedy, Andrea Negrete, Josh Palacios, Alex Villarreal, Jairus Esparza; directed by Joshua Kennedy.

25%off
Sexpots From Space Double Feature: Voyage To The Planet of... (DVD-R) TOP 25 Bestselling DVD
$5.95 CYBER WEEK
Add to Cart