Writer-director Joshua Kennedy plays the Great Detective in this tribute to the great Sherlock Holmes films of yesteryear. With the vintage Holmes short "Lost in Limehouse" (1933). 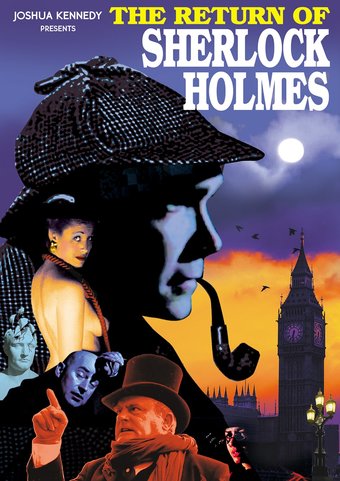 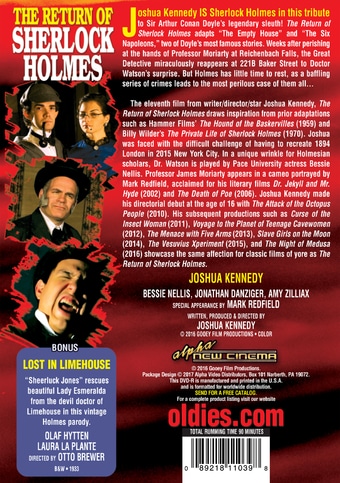 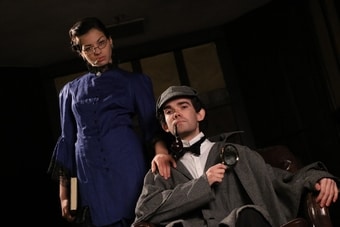 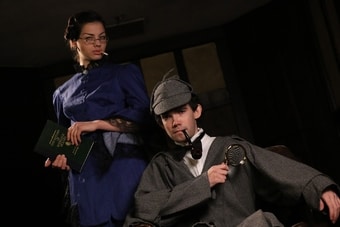 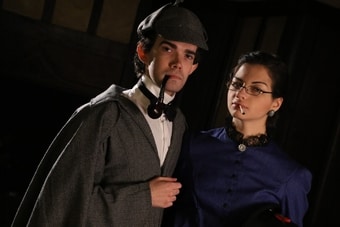 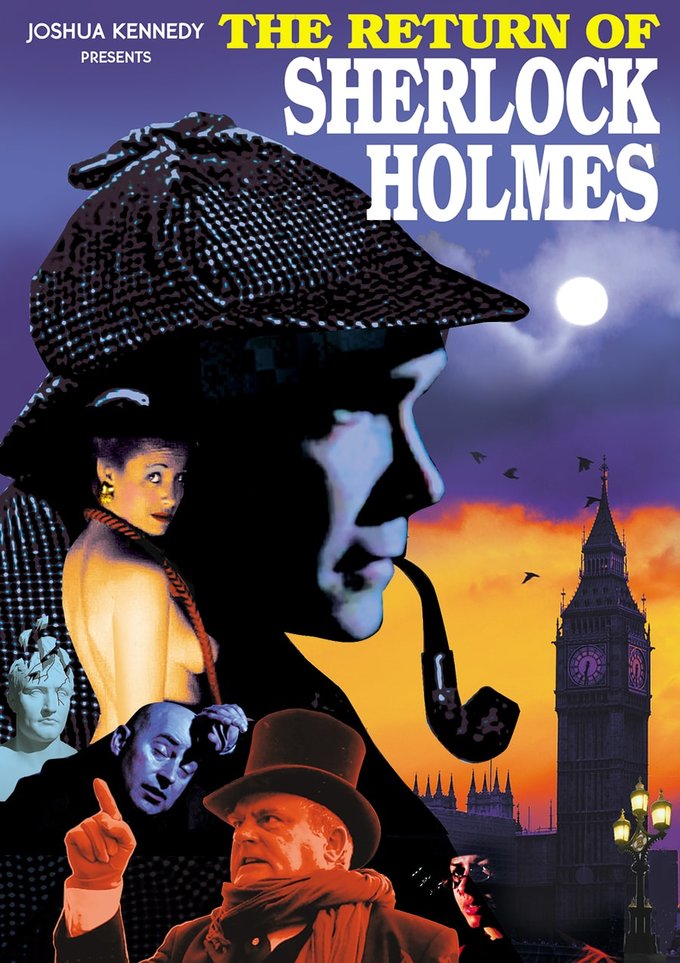 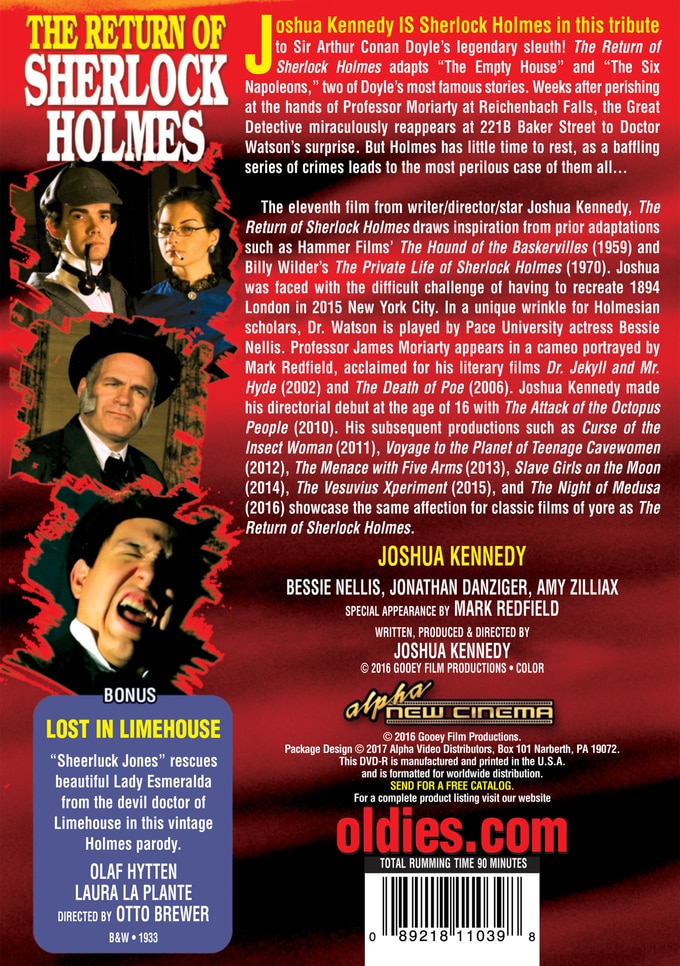 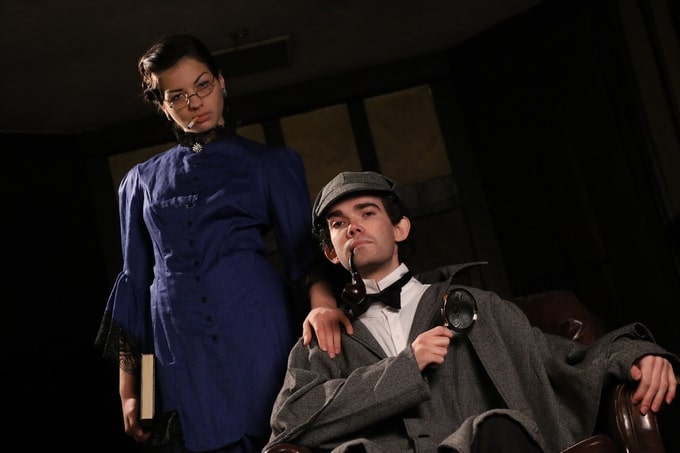 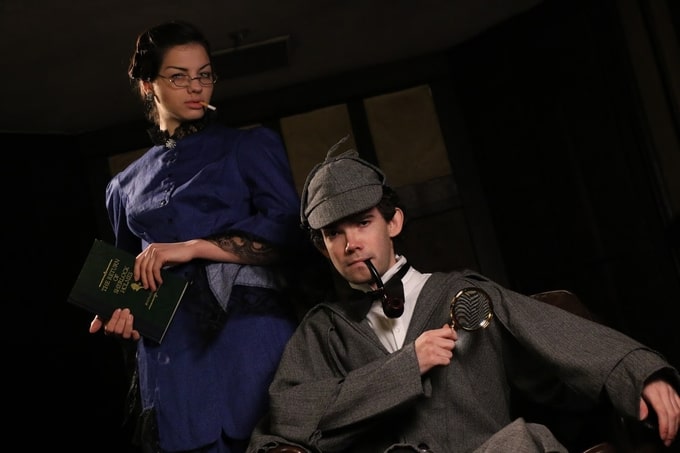 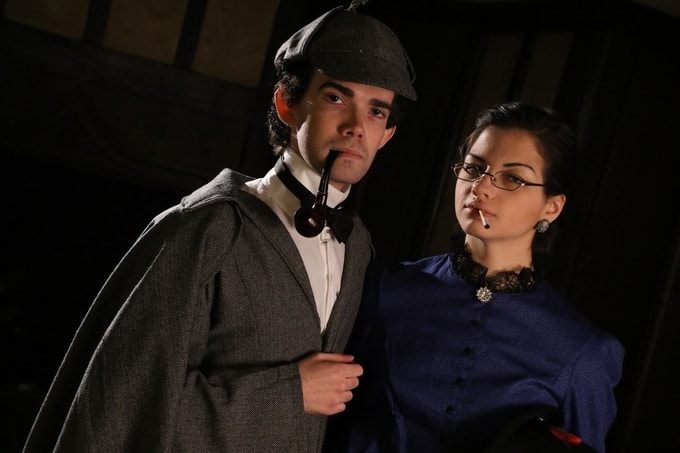 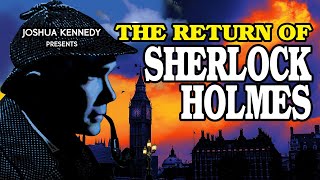 Joshua Kennedy IS Sherlock Holmes in this tribute to Sir Arthur Conan Doyle's legendary sleuth! The Return of Sherlock Holmes adapts "The Empty House" and "The Six Napoleons", two of Doyle's most famous stories. Weeks after perishing at the hands of Professor Moriarty at Reichenbach Falls, the Great Detective miraculously reappears at 221B Baker Street to Doctor Watson's surprise. But Holmes has little time to rest, as a baffling series of crimes leads to the most perilous case of them all...

The eleventh film from writer/director/star Joshua Kennedy, The Return of Sherlock Holmes draws inspiration from prior adaptations such as Hammer Films' The Hound of the Baskervilles (1959) and Billy Wilder's The Private Life of Sherlock Holmes (1970). Joshua was faced with the difficult challenge of having to recreate 1894 London in 2015 New York City. In a unique wrinkle for Holmesian scholars, Dr. Watson is played by Pace University actress Bessie Nellis. Professor James Moriarty appears in a cameo portrayed by Mark Redfield, acclaimed for his literary films Dr. Jekyll and Mr. Hyde (2002) and The Death of Poe (2006). Joshua Kennedy made his directorial debut at the age of 16 with The Attack of the Octopus People (2010). His subsequent productions such as Curse of the Insect Woman (2011), Voyage to the Planet of Teenage Cavewomen (2012), The Menace with Five Arms (2013), Slave Girls on the Moon (2014), The Vesuvius Xperiment (2015), and The Night of Medusa (2016) showcase the same affection for classic films of yore as The Return of Sherlock Holmes.


The Return Of Sherlock Holmes (2016)
In this film, Joshua Kennedy had to recreate the look of period London and thanks to strong location scouting and tightly composited shots, he succeeds. There's no background that doesn't look like it couldn't have existed in Victorian London, from streets filled with vintage architecture to a fine recreation of Holmes' lodgings filled with shelves of books and convincing period furniture. Even a grassy knoll standing in for Reichenbach's environs fits in well.
Kennedy's cast again consists of youthful friends and classmates, but is able to add several more experienced faces to bring credibility to the tale. Jonathan Danziger is a friendly but doubtful Inspector Lestrade, Michael Rosenfeld and Kennedy's father Gus distinguished gentlemen who own some of the Napoleon busts, and Amy Zilliax is a hoot as the eager to please Mrs. Hudson. Author Will McKinley makes a dastardly Colonel Sebastian Moran, Mark Holmes has a delightfully wicked grimace as one of the film's other villains, and professional actor Mark Redfield is welcome as the infamous Professor Moriarty in a brief but worthwhile cameo.
The youthful faces however bring weight to their own roles as well as fairly good British accents, enlivening their characters with memorable quirks like those distinctively described in Sir Arthur Conan Doyle's original stories. Jake Williams entertains as a very genial shopkeeper, Traci Thomas is memorable as a journalist who also operates a brothel, and Jorge Chapa brings the jovial but not easily impressed manufacturer of the busts to life.
As Sherlock Holmes is Kennedy himself. Playing him as energetic and egocentric, his Holmes is great fun to watch, with a glib tongue and an excited manner when plunging into his latest case. Bessie Nellis, so good in Dracula A.D. 2015 as the Pace teacher who reincarnates the evil Count, is a female Doctor Watson, lovely but cool and logical, making her value to Holmes clearly evident. Wearing a pair of spectacles with enlarging lenses she slips into place to examine clues and medical matters, and delivering her dialogue in a measured and cultured voice, she's wonderful as the yin to Kennedy's yang.
The film's screenplay by Kennedy (with additional dialogue provided by Nellis), incorporates adaptations of two Holmes tales by Sir Arthur Conan Doyle, The Adventure Of The Empty House and The Adventure Of The Six Napoleons, authentically recreating those stories, while inserting a few other elements to add color to the narrative. Hayden Dabbs' cinematography provides bright hues and well-lit backgrounds, while Kennedy again concocts a memorable soundtrack from some unidentified orchestral sources.
This film, despite its familiar stories and iconic characters, is distinctive thanks to Kennedy's youthful exuberance, Nellis' refined Watson, and its imaginative capturing of a time long ago and a place far away.


You can take all of your current, Hollywood hotshots and toss 'em away. In my estimation, they don't hold a candle to the outstanding talent of writer/director/producer Joshua Kennedy. That's because Kennedy understands (i.e., remembers) how movies were once made. However, when need be, Kennedy's modern sensibilities easily surpass any offered by those young upstarts who get their breaks not through talent, but nepotism and loads of unjustified luck. Trust me: In the vastness of all the Hollywood phonies and wannabes, Kennedy is a breath of fresh air and in every respect, the real deal.

The film's structure is episodic, catering to Doyle's "The Empty House" and "The Six Napoleons" (both included in the author's anthology, "The Return of Sherlock Holmes"), with Kennedy giving an exemplary performance as the legendary, Baker Street detective. The beautiful Bessie Nellis stars as Dr. Watson, and though she's not the first, female Watson to bless celluloid, she's certainly the most enchanting; and her performance complements Kennedy's to a tee. Talk about chemistry! It rolls off this spry couple in spades.

The overlap of Doyle's yarns flows fast and flawlessly (as anyone acquainted with the short stories will see), which is good, for there have been a few Holmes entries to hit a slow snag or two, but "Return of Sherlock Holmes" gallops forth with an eager gait, thanks to Kennedy's excellent script and directorial style. Sure, we know that Holmes and Watson will solve the mysteries, but the build-up in each instance makes one yearn for such with increased fervor (and a few laughs), even if an air of familiarity prevails from the classic plots.

Because Kennedy so expertly captures the classy flair of the Holmes movies of old, I implore him to do a sequel. He's so natural in the role that it would be blasphemous to let the opportunity slip.

60%off
Sherlock Holmes and the Deadly Necklace
$3.98 Super Savings
Add to Cart