Alan Drake disobeys orders to abandon his aircraft and hit the silk. This doesn't sit well with the tightly knit squad. And the team's opinion plunges further when he's suspected of romancing the unit commander's wife. 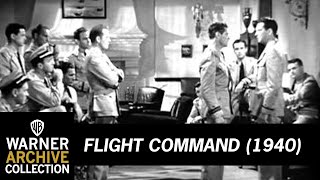 The night fog is like a soup you can stand your spoon in. But Alan Drake, en route to join the elite Navy Hell Cats fighter squadron, disobeys orders to abandon his aircraft and hit the silk. The headstrong maneuver doesn't sit well with the tightly knit squad. And the team's opinion of Drake will plunge further when he's suspected of romancing the unit commander's wife. Robert Taylor plays the cocksure cadet who must prove himself in this pre-war film whose scenes of aerial training and readiness mirrored America's growing awareness that it may soon be involved in World War II. Taylor prepared for the role by taking flight lessons and developed a lifelong love of aviation. He joined the Navy Air Corps during the war.

MGM had a tendency to overglamorize the sort of rough-hewn film fare that Warner Bros. offered to its public without adornments. Such was the case of FLIGHT COMMAND. Instead of Warners' streetwise James Cagney, the MGM film stars pretty-boy Robert Taylor as the obligatory hotshot cadet who chafes at the authority and discipline of a naval flight squadron. While Warners might have done without a romantic subplot, MGM contrives to have Taylor fall for the wife (Ruth Hussey) of squad commander Walter Pidgeon. And whereas Warners would have told this story compactly in 90 minutes, MGM lolls around for nearly two hours before Taylor's anticipated redemption and "make good" scene. MGM newcomer Red Skelton shows up in FLIGHT COMMAND for comedy relief, which turns out to be neither.

Military | Pilots | Flying | Training
This product is made-on-demand by the manufacturer using DVD-R recordable media. Almost all DVD players can play DVD-Rs (except for some older models made before 2000) - please consult your owner's manual for formats compatible with your player. These DVD-Rs may not play on all computers or DVD player/recorders. To address this, the manufacturer recommends viewing this product on a DVD player that does not have recording capability.