To Love Her Is To Be Cursed! 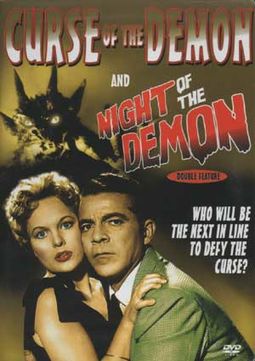 When psychologist John (Dana Andrews) Holden's colleague, Professor Harrington, is mysteriously and brutally murdered, Holden denies that it's the work of the devil...until he becomes the next target of the Curse of the Demon!

A cult classic, Curse of the Demon is restored for the first time in the U.S. at its full original length. Plus, catch the rare truncated American release back to back.

A British production, Night of the Demon was released in the UK in a 95 minute running time. For the American market, the film was cut to 82 minutes, re-titled Curse of the Demon, and released in 1958. This DVD presents, for the first time in the U.S., the fully restored 95 minute version as seen by British audiences in 1957, as well as the rare, truncated American release.

Dr. Holden (Dana Andrew), a psychologist knowledgeable about the occult, is dismayed by a friend's strange death, leading him to investigate a demon-worshipping cult in England. But the leader of that sect, Prof. Karswell (Niall MacGuinness), resists Holden's inquiries by calling up an actual demon to fight the good doctor. Can Holden hold his own in a battle of good vs. evil'

Based on the M.R. James short story "Casting the Runes," Jacques Tourneur's film is considered to be one of the true classics of the horror genre, relying heavily on the power of suggestion to create a heavy atmosphere of fear and dread. The famous, much-debated monster was added by the studio against Tourneur's wishes. The original, uncut version is known as NIGHT OF THE DEMON.

Customer Rating:
Based on 123 ratings.

A Terrifying Masterpiece Movie Lover: Lundy After Midnight from Hiawatha, IA -- May, 31, 2007


Curse/Night of the Demon is one of the darkest, most intelligent horror films ever made. The story, acting and special effects are most convincing and highly impressive. This is a serious excursion into the realm of witchcraft and demonology--and one helluva great monster movie.