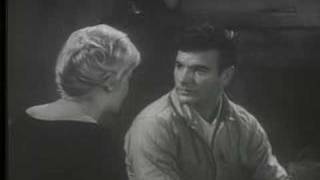 Sailing to a remote and deserted island, Captain Thorne Sherman (James Best) delivers supplies to scientist Dr. Craigis (Baruch Lumet), who is anxious to have his daughter, Ann (Ingrid Goude), join the skipper on his return voyage. And for good reason: Dr. Craigis and his assistants have accidentally wreaked biological havoc by spawning mutant shrews that are starving for food - especially humans! Sherman must fight for survival while fending off these savage creatures. Surrounded by the bloodthirsty beasts, he concocts a desperate escape plan that will keep viewers' hearts pumping with excitement. Shot in Texas on an extremely low budget, The Killer Shrews is well acted and tensely written and has justifiably become a minor classic of its genre.

People trapped on an island off Texas are attacked by vicious shrews developed by bungling scientists.

The Beast of Yucca Flats
$10
Add to Cart

Customer Rating:
Based on 6763 ratings.


Ken Curtis, of Gunsmoke fame is a key player in this crummy movie. Poor, exaggerated acting, coupled with a bad script and weak editing, make it not good technically. It is still entertaining though, as Curtis, who also is producer of this film, is a cowardly dog.

Too many dogs were dentally mutilated for this film Movie Lover: Spencer Koelle from Pennsylviania home of the radioactive deer -- July, 26, 2004


This film dares to walk the fine line between suspensful and boring. Unfortunately, within the first ten minutes it trips and falls face-first into boring.

For the first fourty-five minutes we have a single scene location filled with the thrills of watching characters ingest enough alcohol to kill a full-grown bison and listening to the scientist with the nearly incomprehensible accent reiterate little tidbits about shrews that he and/or the narrator already went over.

I finished this movie hours ago and I still can't decide whether the escape plan with barrels was funny or just plain stupid.


I live on the only island in Texas. It is not small, it is in fact huge. The opening scene of the isalnd could not have been made here-okay that having been said the rest is pure South Texas Terrirtory. The monster shrews (a shrew is teeninieiest little mouse critter with rapier sharp teeth) are played by dogs. Dogs with yard strewn over their bodies and vinyl covered tails. There had to be some dental work done on these belagured creatures to simulate shrew teeth. No wonder the poor varmits attacked! This was all done prior to the cruelty in motion picture laws so we can't complain-or maybe we could. But that's not the point. The first half is worth skipping through is you get the notion. Go to chapter two and start there thats the part with the gnarlynest in it. I found the means of escape the most intriguing. The heros build a walking tank out of old oil drums to march 150 feet to the dock. They stop and rest a few times and eventualy escape with thier lives. Sorry if that spoiled it.


This is easily the best film ever made on the subject of giant killer shrews. OK, this is a very low budget film and is both derided and beloved for putting dogs in shrew suits (personally I think the shrews look very, very cool indeed) but it is also quite gripping and suspenseful, especially when it really starts moving in the second half. The narrated introduction looks a bit soft and worn but the print improves tremendously by the opening titles. In fact this is one of the best-looking Alpha DVDs I’ve seen. I recommend it highly!