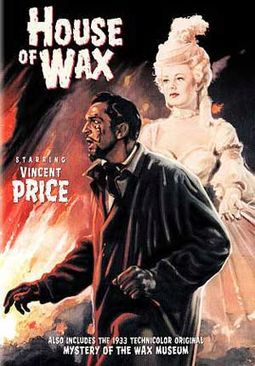 In the wicked performance that crowned him the movie's master of the macabre. Vincent Price plays a renowned wax sculptor plunged into madness when an arsonist destroys his life's work. Unable to use his flame-scarred hands, he devises a new - and murderous - way of restocking his House of Wax.

The sweet dread and sheer fun of this creepy classic, co-starring Phyllis Kirk, Carolyn Jones and Charles Bronson and directed by Andre de Toth, had its roots in a Warner Bros. chiller from 20 years before: Mystery of the Wax Museum, starring Lionel Atwill as the wax-wielding madman and Fay Wray as a potential victim. Directed by Michael Curtiz and shot in a chillingly effective early two-color Technicolor process, it and its spooky remake offer you a delicious double-dip in a paraffin bath of terror.

André de Toth's remake of MYSTERY OF THE WAX MUSEUM is one of the first and best 3-D (stereoscopic) feature films, an alternative technology (like Cinemascope, Cinerama) used by 1950s directors attempting to compete with the new threat of television. Professor Jarrod (Vincent Price) is a devoted wax figure sculptor for his museum in 1910s NYC. When his financial partner, Sidney Wallace (Paul Cavanagh), demands more sensational exhibits to increase profits, Jarrod refuses. The vengeful Wallace torches the museum, leaving Jarrod for dead. Miraculously, Jarrod survives (though his hands and legs are rendered useless) and builds a new House of Wax with help from threatening deaf-mute sculptor, Igor (Charles Bronson). The museum's popular "Chamber of Horrors" showcases recent crimes like the murder of Wallace, a victim of a cloaked, disfigured killer along with his fiancée, Cathy (Carolyn Jones). When Cathy's friend, Sue (Phyllis Kirk), visits the museum she makes a discovery that leads to the horrifying truth behind the House of Wax. With gasp inducing (and tongue-in-cheek) 3-D scenes like the museum fire, paddleball man, and can-can girls, de Toth creates an atmospheric film which stands up as a horror classic in 2-D as well.

24%off
House on Haunted Hill
$5.30 Super Savings
Add to Cart