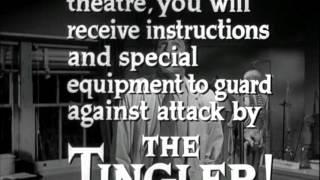 "I am William Castle, director of the motion picture you are about to see. I feel obligated to warn you that some of the sensations--some of the physical reactions which the actors on the screen will feel will also be experienced, for the first time in motion picture history, by certain members of this audience. I say certain members because some people are more sensitive to these mysterious electronic impulses than others. These unfortunate, sensitive people will at times feel a strange, tingling sensation; other people will feel it less strongly. But don't be alarmed--you can protect yourself. At any time you are conscious of a tingling sensation, you may obtain immediate relief by screaming. Don't be embarrassed about opening your mouth and letting rip with all you've got, because the person right next to you will probably be screaming too. And remember, a scream at the right time may save your life."
- William Castle, in the opening

Vincent Price stars as an obsessed doctor who discovers that manifests itself as a parasitic creature, which grows on the spinal cords of terrified people. If they scream, the Tingler can be destroyed. If they don't, it will sever the spinal column and kill them. He successfully isolates and removes the Tingler from a deaf mute (Judith Evelyn) who has been scared to death by her devious husband. Once captured, the Tingler escapes and runs amok in a crowded movie theater.

The Tingler is legendary horror director William Castle's magnum opus. After the success of House On Haunted Hill, Castle devised a new gimmick called "Percepto" for The Tingler. Participating theaters would wire seats so that random moviegoers would get a tangible electric shock during climactic moments in the film. Another novelty used to maximum effect is the short color sequence depicting blood pouring from a faucet and filling a bathtub. Castle went on to direct more cult classics like Homicidal and 13 Ghosts and later produced the mainstream hit Rosemary's Baby.

This delightful gimmick film from producer-director William Castle stars Vincent Price as Dr. Chapin, a scientist who discovers a caterpillarlike parasite that grows in the human spine when someone is afraid and that, unless they scream, can grow large enough to kill them. He solemnly dubs this creature the tingler. Philip Coolidge plays the owner of a nearby cinema who befriends the doctor and whose deaf-mute wife suddenly receives all sorts of shocks, like the sight of a bathtub full of blood with a hand reaching out from it. Since she can't scream, she dies, and Chapin gets his hands on her oversize tingler. When it eventually escapes inside the movie theater, the film within the film, and then the film itself, stops for an announcement from Price, out of character, urging the audience to scream their heads off. Castle originally had random seats in theaters equipped to deliver small electric shocks at this key moment, and he hired women to faint and ushers to carry them out, all in his determination to get the audience to scream. Even without all the ballyhoo it's a fun film, a delightful relic from the days of the gimmick.

Mad scientist Vincent Price discovers that the emotion of terror is actually caused by a spinal-cord parasite he calls the tingler. After he has successfully removed the tingler from a perpetually terrified deaf-mute woman, it gets loose inside a crowded movie theater and runs amok.