The Thing from Another World (aka "The Thing")

Look Out … it’s The Thing 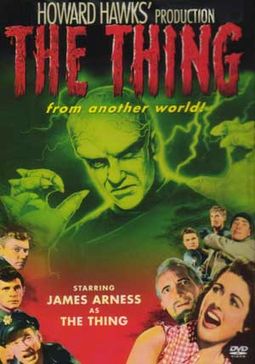 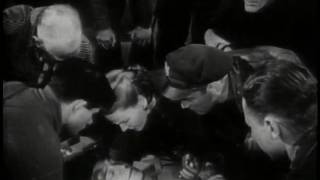 The Thing From Another World (1951) - Movie Trailer 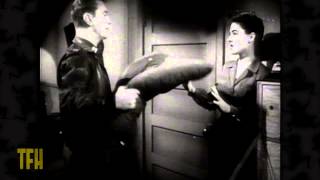 Jesus Trevino on THE THING FROM ANOTHER WORLD (Featurette)

Arctic researchers discover a huge, frozen spaceling inside a crash-landed UFO, then fight for their lives after the murderous being ( a pre-Gunsmoke James Arness) emerges from icy captivity. Will other creatures soon follow? The famed final words of this film are both warning and answer: "Keep watching the skies!"

A snappy ensemble. An eerie theremin-infused Dimitri Tiomkin score. Rising suspense, Crisp Christian Nyby direction. All merge in an edgy classic produced by Howard Hawks (Bringing Up Baby, Rio Brave) and filled with Hawksian trademarks of rapid-fire dialogue and of people united by do-or-die stress. Keep watching the skies and the screen. Don't miss a moment of "one of the best sci-fi thrillers of the '50s" (John Stanley, Creature Features).

A wonderfully crisp script and quick-paced direction distinguishes this film about an alien creature discovered near an Arctic outpost. Members of a scientific research team cart the frozen pilot back to camp where it thaws out--much to their regret.

One of the great science fiction classics made in the 50s -- the period when the genre thrived.
A group of US scientists and servicemen, stationed on the North Pole, encounter an odd magnetic phenomenon that confuses all of their instruments. When the crew goes out to investigate, they find a block of ice containing an odd life form. But this is no archeological discovery -- because when the block melts, an invincible, grotesque creature, smarter and more powerful than humans, rises and goes on a rampage, almost destroying the polar station. Now the occupants of the station have to stop The Thing before it kills them... and embarks on its plan to destroy the planet.

Customer Rating:
Based on 38257 ratings.


This is a decent movie. While the dialogue and characters are passably done, the scientist is rather foolish to the point of unbelievable, and the actual appearances could use some work. I'd like to see just a touch more alien quality, and maybe some follow-up on the sangrivorous sprouts.

That said, the best part about this movie is the Creature Concept. A regeneration, blood-drinking beclawed seed-filled strossus.