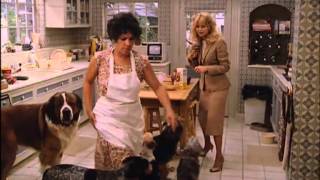 Kindhearted lawyer Glenda's (Goldie Hawn) desire to lend a helping hand is evident in the number of stray dogs she has taken in. Her husband Ira (Charles Grodin) is a stuffy district attorney with designs on political office. When her ex-husband Nick (Chevy Chase), a writer who has been forced to rob a bank, shows up on her doorstep seeking refuge from the authorities, she takes him in--spurring a serious of painfully comedic situations as she attempts to keep him hidden from uptight Ira. Razor sharp timing from a trio of comedic heavyweights propels this descendent of 1930s screwball romantic comedies from Neil Simon.

Neil Simon penned this farce about a romantic triangle involving two lawyers and a fugitive from the law. The heroine, Glenda, is a bleeding heart attorney with a penchant for adopting anybody and anything in need -- from stray animals to a ragged assortment of low-life ex-clients. But when ex-husband Nick shows up seeking refuge, Glenda really finds herself in hot water. He's on the run from the law after being strong-armed at gunpoint into a bank robbery -- with plenty of surveillance camera footage as evidence. Glenda, of course, is unable to turn him away -- much to the annoyance of her new husband, a straight-laced district attorney who is attempting to run for political office.

The Duchess and the Dirtwater Fox
$19
Add to Cart

Customer Rating:
Based on 15103 ratings.


It's a funny movie. Chevy Chase & Goldie Hawn really show Charles Grodin a good time by being smart and hiding out on the tower. So I thimk that this movie is really excellant.