Anybody who could turn Lot's wife into a pillar of salt, incinerate Sodom and Gomorrah and make it rain for forty days and forty nights has got to be a fun guy.

17K ratings
Currently Out of Stock: We'll get more as soon as possible
Notify Me When Available
Add to Wishlist
Format:  DVD
item number:  X966
Our customers love us! 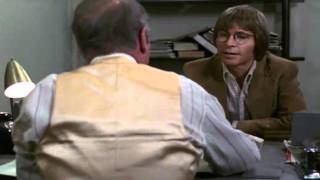 "Do you swear to tell the truth, the whole truth, and nothing but the truth'"--court clerk
"So help me me."
- God (George Burns) being sworn in to testify in court

Jerry Landers (a terrifically surprising John Denver) is an average guy in every sense of the word. He lives a completely normal, dull life, working at the local supermarket (where everybody, of course, knows him and likes him) and never doing anything out of the ordinary. That's why no one is more surprised than he is when God chooses to make himself known to the world through Jerry by sending him a typewritten, misspelled note granting him an audience with the Supreme Being. Jerry doesn't believe his eyes when God turns out to be an old, scrawny man (who looks a lot like George Burns). First, God must convince Jerry that he really is whom he claims to be; as Jerry grow closer and closer to him, he starts growing apart from his family--his wife, played by Teri Garr, thinks he has lost all his marbles. As Jerry goes public with God's message, his faith is tested every step of the way, resulting in a very funny and meaningful trial scene. This wry, thoughtful comedy from Carl Reiner, based on the novel by Avery Corman, carries a serious message about religion, faith, and the way people care for the world they've been given. George Burns is delightful as the forthright, wisecracking God; his scenes with Denver are cinematic treasures.