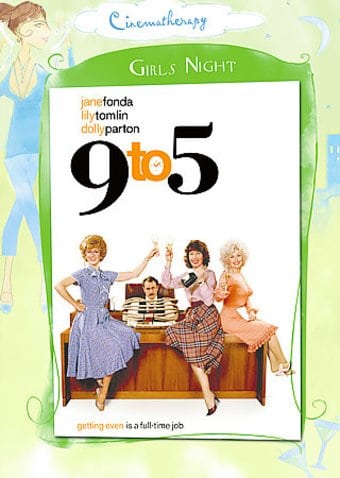 "I'll change you from a rooster to a hen with one shot."
- Doralee Rhodes (Dolly Parton) to Franklin Hart (Dabney Coleman)

9 TO 5 is the much-loved revenge comedy about three female office workers (the terrific trio of Lily Tomlin, Jane Fonda, and Dolly Parton) in a giant corporation who are subjected to the indignity of a chauvinist boss (played marvelously by Dabney Coleman). They entertain wild fantasies to get even through a series of outrageous incidents. When the film first came to theaters in 1980, it was a huge hit not just because of the quality of the film but because of the subject matter of women being treated fairly in the workplace. Dolly Parton's theme song was nominated for an Academy Award.

Three working women, one a hyperefficient office manager, one a frazzled divorcée, and the last a sexy executive secretary, combine forces to take revenge against their sleazy, sexist boss.