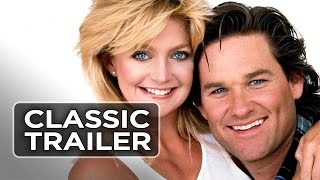 Hawn is a super-rich spoiled brat, over-bored you might say. Russell is a struggling carpenter who should know how to handle brats since he raised four of them. One night Goldie goes overboard on her yacht, loses her memory, and winds up in Kurt's world. Then the sparks begin to fly.

It's the craziest mix-up ever! Goldie Hawn and Kurt Russell dazzle the screen in this buoyant and screwball comedy of memory-making and memory-faking. One of Hollywood's most dynamic screen pairs, Hawn and Russell make the most of every hilarious situation in this delightful riches-to-rags romance that's perfect entertainment for anyone who appreciates a great practical joke. Hawn is Joanna Stayton, the pampered wife of a pretentious, yacht-owning socialite. When their boat gets stuck for repairs, Joanna employs carpenter Dean Proffitt (Russell) to improve her closet space. But when Dean asks to be paid, he's blatantly turned down by the "nothing is ever good enough for me" Joanna. So when Joanna falls overboard and gets a bad case of amnesia, Dean takes advantage of the situation and, in a stroke of retributive genius, tells her that she's his wife and the mother of his four unruly children!

Joanna is an obnoxious, wealthy woman, who becomes afflicted with amnesia after she slips off her yacht. Dean Proffitt is the gruff, blue-collar woodworker who recently had a nasty run-in with Joanna. Dean spots the memory-free lass on television, and in an act of vengeance, "comes forward" to declare her as his wife. The once-pampered Joanna is now performing housework and caring for Dean's four uncouth boys! The two eventually fall in love with each other, but when Joanna's real husband shows up (and makes her aware of her riches), whom will she choose'