Down and Out in Beverly Hills R

31K ratings
Currently Out of Stock: We'll get more as soon as possible
Notify Me When Available
Add to Wishlist
Format:  DVD
item number:  36FAV
Our customers love us! 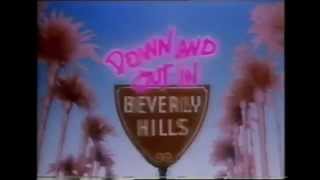 Down and Out in Beverly Hills Trailer

Bette Midler and Richard Dreyfuss star as Barbara and Dave Whiteman, a nouveau riche Beverly Hills couple whose entire household is turned upside down with one act of uncharacteristic generosity. On a typically sunny afternoon, Dave spies Jerry (Nick Nolte), a homeless man, attempting to drown himself in their swimming pool. Dave rescues Jerry and then invites him to stay with the family, shocking Barbara, his high maintenance wife; Max (Evan Richards), his disgruntled son; and Carmen (Elizabeth Peña), his unhappy mistress and maid. The Whiteman household is far from functional with an unsatisfying marriage, a son who communicates only through video footage, a daughter who has escaped to a faraway college, a doggy psychiatrist for their neurotic dog, and a constant stream of gurus for Barbara, who's trying to find inner peace. Jerry's unexpected arrival injects a jolt of energy into the sterile Beverly Hills family. He's charismatic and charming, and before long he has Dave partying with his homeless buddies, Barbara acting out her own wild and crazy sexual fantasies, Max admitting to his private life, and Carmen inciting communist revolt. As Jerry becomes part of the Whiteman family, he thrills them, disappoints them, and ultimately reminds them of what it means to be a family. This charming remake of Jean Renoir's French farce BOUDU SAVED FROM DROWNING is a clever satire on modern excesses and dysfunctional families. Directed by Paul Mazursky, DOWN AND OUT IN BEVERLY HILLS features outrageous comedic performances from its cast of stars, including Little Richard as a wacko neighbor.

Down And Out In Beverly Hills
Rescued from drowning in the swimming pool of a nouveau riche Beverly Hills couple (Richard Dreyfuss, Bette Midler), a disconsolate bum (Nick Nolte) brings startling and hilarious changes to the entire household -- including the family dog, Matisse (Mike the Dog), in the most uproarious screen debut of the year). Expertly directed by Paul Mazursky, and featuring a stellar cast and a great hit song performed by the legendary Little Richard, you'll be up and laughing at the most outrageously funny, critically acclaimed smash hit comedy!

In Paul Mazursky's DOWN AND OUT IN BEVERLY HILLS, a street bum is adopted by an odd but extremely wealthy Beverly Hills family after he is found trying to drown himself in their luxurious swimming pool. But once they help him out, they can't get him out of their lives.