Who Is Killing the Great Chefs of Europe? PG

Morley plays an acerbic gourmet magazine publisher whose series of chins and stomachs bear witness to his love of fine dining. When doctors order him to give up his favorite dishes - one by one the chefs who create those specialty dishes are slain. 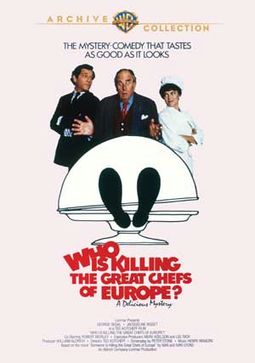 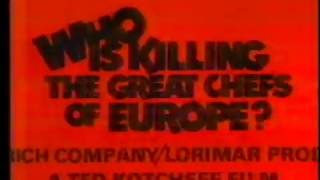 Who's Killing the Great Chefs of Europe Trailer 1978

George Segal, Jacqueline Bisset and Robert Morley top the bill of fare in this food- and fun-filled mystery garnished with wit. Segal plays a glib fast-food tycoon and Bisset is his ex-wife, a pastry chef who may become the last course in an enigmatic killer's banquet of death. Morley has a tasty field day as an acerbic gourmet magazine publisher whose cascading series of chins and stomachs bear witness to his love of fine dining. But the mogul's doctors have ordered him to give up his favorite dishes - and one by one the chefs who create those dishes are slain in the manner of their specialties. Phillipe Noiret, Jean-Pierre Cassel and Jean Rochefort give delicious support, as does a mouth-watering array of wild mushrooms, plump pigeons, shiny artichokes, rich chocolate and more gastronimical delights. Dig in!

A campy mystery with a continental flavor has the greatest chefs of Europe dying in the manner of their most famous entrees.

Europe's greatest chefs are being murdered one by one and the police can't figure out who the madman can be. Natasha, a top American cook, could very well be the next victim. But Robby, her ex-husband, attempts to keep her out of harm's way. The two try to get to the bottom of the killings -- and, in the process, they find themselves falling in love again...