A gambling ship owner plans to scam a virtuous young woman, only to fall in love with her and go legit. 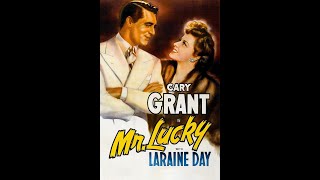 Heads: He wins. Tails: You lose. Joe Adams doesn't play the odds. He makes them. Who would think Cupid would turn the odds against him? With roguish charm and dialogue spiked with Cockney rhyming slang, Cary Grant portrays Joe in a wartime romantic comedy from the director of Mr. Blandings Builds His Dream House. Luck is on Joe's side when he dodges the draft by taking another man's 4-F status. And he seems to hold all aces when he worms his way into a war relief group and plans to pocket its funds. But larceny gives way to love. Joe finds he's in deep with a winsome charity worker (Laraine Day). And that puts him in deep, deep trouble with fellow con artists. Lucky at cards, unlucky in love? Say it ain't so, Joe!

One of Cary Grant's most financially successful 1940s vehicles, MR. LUCKY finds Grant atypically cast as a shifty, out-for-number-one gambler. Having dodged the draft by adopting the identity of a dead man, Grant sets his sights on purchasing a fancy gambling ship. To raise the necessary funds, he pretends to be working hand in glove with the American War Relief society. Once he meets Laraine Day, however, Grant is seized by an uncontrollable bout of honesty. It takes him awhile, but he finally does the right thing. The film is framed in flashback, as old seaman Charles Bickford explains why a tearful Laraine Day waits at the dock each evening for a certain ship to come in. Also in the cast is Paul Stewart as a cold-eyed but nonetheless semi-comic hoodlum, and Kay Johnson and Gladys Cooper as elegant but gullible society women. The best aspect of this breezy comedy-drama is Grant's cockney propensity for "rhyming slang," a running gag better heard than described. MR. LUCKY was later adapted into a TV series in 1959, with John Vivyan in the Cary Grant part and with Blake Edwards at the production controls.

Romance | Scams And Cons | Marriage | Crime | Romantic Comedy | Gambling | Romances | Love
This product is made-on-demand by the manufacturer using DVD-R recordable media. Almost all DVD players can play DVD-Rs (except for some older models made before 2000) - please consult your owner's manual for formats compatible with your player. These DVD-Rs may not play on all computers or DVD player/recorders. To address this, the manufacturer recommends viewing this product on a DVD player that does not have recording capability.

For Whom the Bell Tolls
$8.70 Super Savings
Add to Cart