Bette Davis portrays twin sisters Kate and Pat: the first good and the other, if not exactly evil, a vain vixen who's landed the husband Kate wanted. When Pat drowns, Kate grabs her chance to steal her sister's identity - and husband. 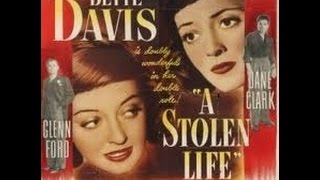 Classic film fans rejoice: A Stolen Life stars two Bette Davises in one grand, heart-wrenching melodrama. The iconic actress portrays twin sisters Kate and Pat: the first good and the other, if not exactly evil, a vain vixen who's landed the husband (Glenn Ford) Kate wanted. One fateful day a storm comes up while the sisters are boating, Pat drowns and Kate grabs her chance to steal her sister's identity - and husband. Instead of using makeup or hair tricks to differentiate the twins, Davis relies on something much more effective: acting talent. And viewers will note she actually plays three roles: Kate, Pat and Kate pretending to be Pat. It's a dazzling balancing act - and Davis puts every step exactly right.

Identical twins, one a shy artist, the other a predatory man-snatcher are in love with the same man, who happens to be married to the artist. Academy Award Nominations: Best Special Effects.

Romance | Suspense | Tear Jerker | Thriller | Theatrical Release
This product is made-on-demand by the manufacturer using DVD-R recordable media. Almost all DVD players can play DVD-Rs (except for some older models made before 2000) - please consult your owner's manual for formats compatible with your player. These DVD-Rs may not play on all computers or DVD player/recorders. To address this, the manufacturer recommends viewing this product on a DVD player that does not have recording capability.