Gamera Gammera the Invincible (aka "Gamera")

A giant fire-breathing prehistoric monster is resurrected by a nuclear bomb blast. American version of the classic kaiju film, "Gamera." 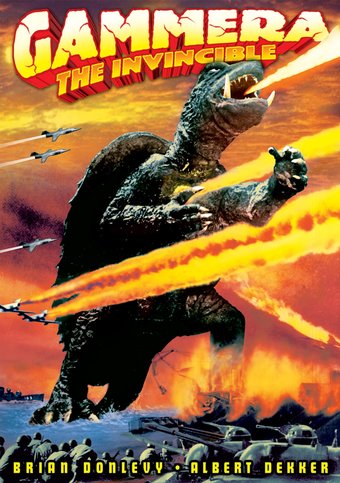 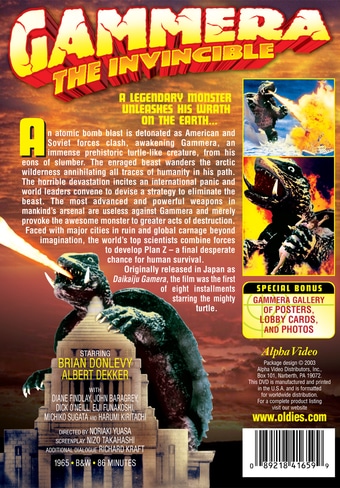 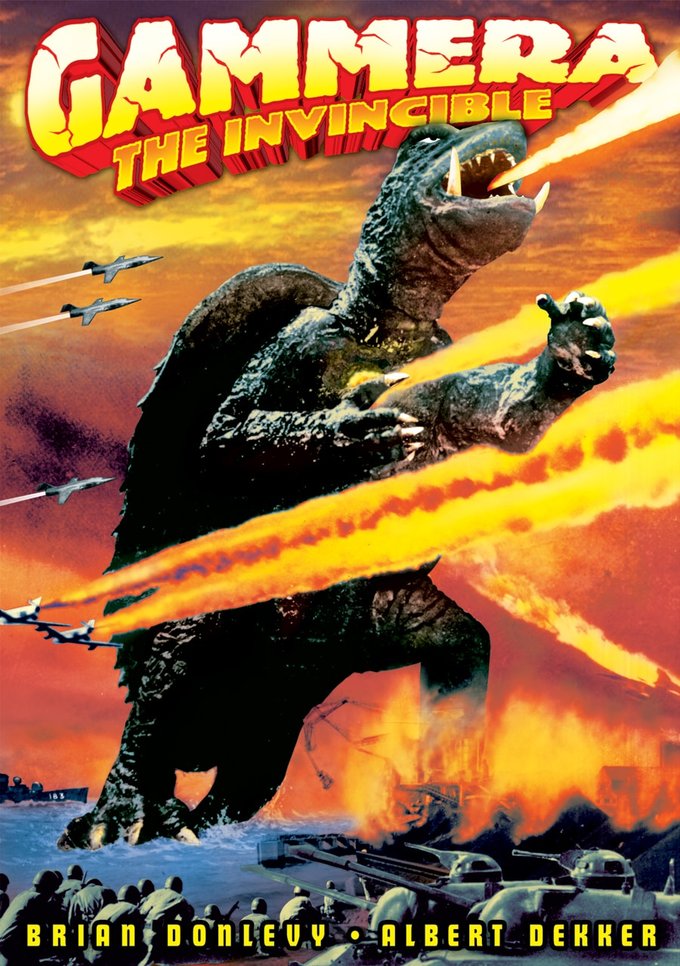 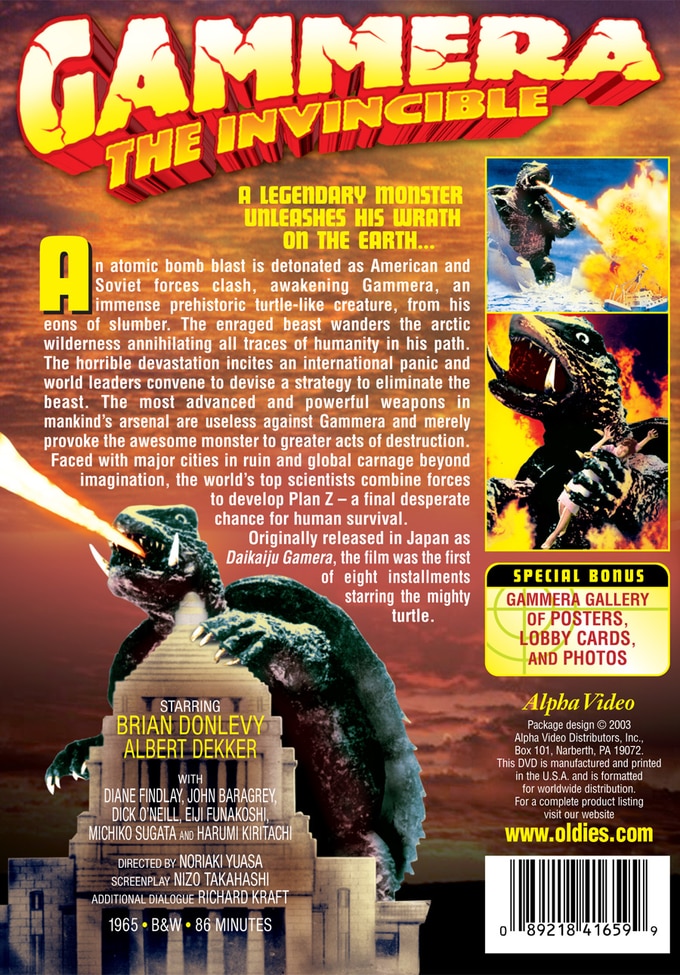 A legendary monster unleashes his wrath on the earth... An atomic bomb blast is detonated as American and Soviet forces clash, awakening Gammera, an immense prehistoric turtle-like creature, from his eons of slumber. The enraged beast wanders the arctic wilderness annihilating all traces of humanity in his path. The horrible devastation incites an international panic and world leaders convene to devise a strategy to eliminate the beast. The most advanced and powerful weapons in mankind's arsenal are useless against Gammera and merely provoke the awesome monster to greater acts of destruction. Faced with major cities in ruin and global carnage beyond imagination, the world's top scientists combine forces to develop Plan Z - a final desperate chance for human survival. Originally released in Japan as Daikaiju Gamera, the film was the first of eight installments starring the mighty turtle.

When a plane carrying an atomic bomb crashes over the Arctic Ocean, the explosion unleashes Gamera, a 200-foot fire-eating turtle. He is hungry for a city and not about to be stopped.

Monsters | Science-Fiction | Theatrical Release
This product is made-on-demand by the manufacturer using DVD-R recordable media. Almost all DVD players can play DVD-Rs (except for some older models made before 2000) - please consult your owner's manual for formats compatible with your player. These DVD-Rs may not play on all computers or DVD player/recorders. To address this, the manufacturer recommends viewing this product on a DVD player that does not have recording capability.

Customer Rating:
Based on 82 ratings.


okay monster fans. get ready to enjoy a great movie.
turtle attack! GAMMERA!!! awesome. loved it and at 6 dollars DANG!!!
the only down side is... the effects of the fire eating is throown off. another thing is gammera is invincible!!!so how does a kid make him go soft.
if you like gammera be sure to check out DESTROY ALL PLANETS. and if you are a true fan get every movie ecxept the newer ones.
OLDIES.COM ROX!!!!!!


I don't remember seeing this movie on TV too much as a kid, so I bought it not knowing really what to expect. The movie is partially edited, having American actors and actresses in parts of the movie, and Japanese in the majority of the movie. The Air Force Base scenes were pretty corny, as was the New York radio talk show scene and the UN conference scene, but all that is made up for in above average special effects (for its' time) and original storyline. Gammera seems to have a "conscience" when it comes to Children (as seen through all Gammera movies), becoming an unlikely hero, which makes these movies very popular with younger audiences. The plan to get rid of Gammera (Plan Z) seems as if they were waiting for an enormous Reptile in Japan for quite a while, but I guess it happens quite often there. But as usual, sequels bring them back. I don't want to spoil the ending for anyone who hasn't seen this one yet, so if you are as curious as I was, get this one.

Hey Joel, look familiar? In a not to distant future, next sunday AD Movie Lover: Spencer Koelle from Pennsylvania -- July, 26, 2004


I first met gamera through the satirical glory of Mystery Science Theater 3000, so I am naturally biased.

One thing that I hate is when movies get preachy on me. The annoying and yet completely NOT cute small child seems to be a recurring theme in Japanese scinema. So it is that the shrieking child with a turtle fixation and apparently full clearance to all levels of military and government offices whines and pouts his way through are little film. The child, after being saved by Gamera from a life-threatening position that Gamera got him into in the first place, constantly insists that Gamera is "kind and gentle", while the ravenous turtle unleashes firey death upon the metropli of Japan, killing countless in its swath of destruction and feasting upon the resulting hellfire.

Despite this, I've always had a soft spot for giant monsters. The idea of a creature that can not only breath out fire, but ingest it, along with radioactive energy AND electricity finishing off with a throuroughly comical method of flight makes this unique monster a favorite.


This is the movie that started it all. This was Daiei's answer to Toho's Godzilla. Both movies have similar stories with American actors added in. Gamera is a monster that was frozen in ice in the Artic and was released from his icey prison when an explosion occurs close to him and breaks him free. The movie is fantastic. Gamera, even though he may be a turtle to new viewers, is actually an incredible monster. Over the years, Gamera has become as popular as Godzilla in Japan, but not so well known in America except for a few. Gamera may have originally been a Godzilla rip off, but has definitely earned his place as one of the greatest monsters Japan has ever created.


Not a bad flick. First of the Gammera movies. As such, one could consider this the "Fellowship of the Rings" equilvilent of the Gammera series. Not quite up to "Lord of the Rings" series standards (though it lasted more than 3 movies), it is still a fun 1960's era movie. Who can dislike a flying turtle? Not the greatest movie ever produced, but a nice Toho effort. Enjoy some rainy afternoon; they certainly don't make movies like these anymore (maybe for the better). Have fun!!!!