Gamera Destroy All Planets (aka "Gamera vs. Viras") 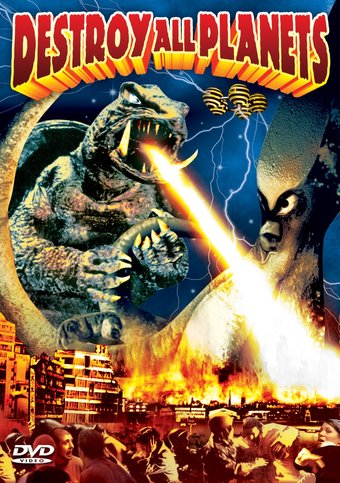 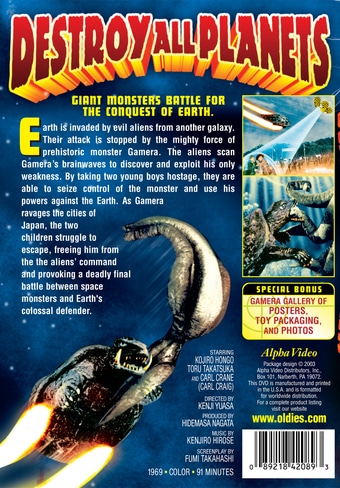 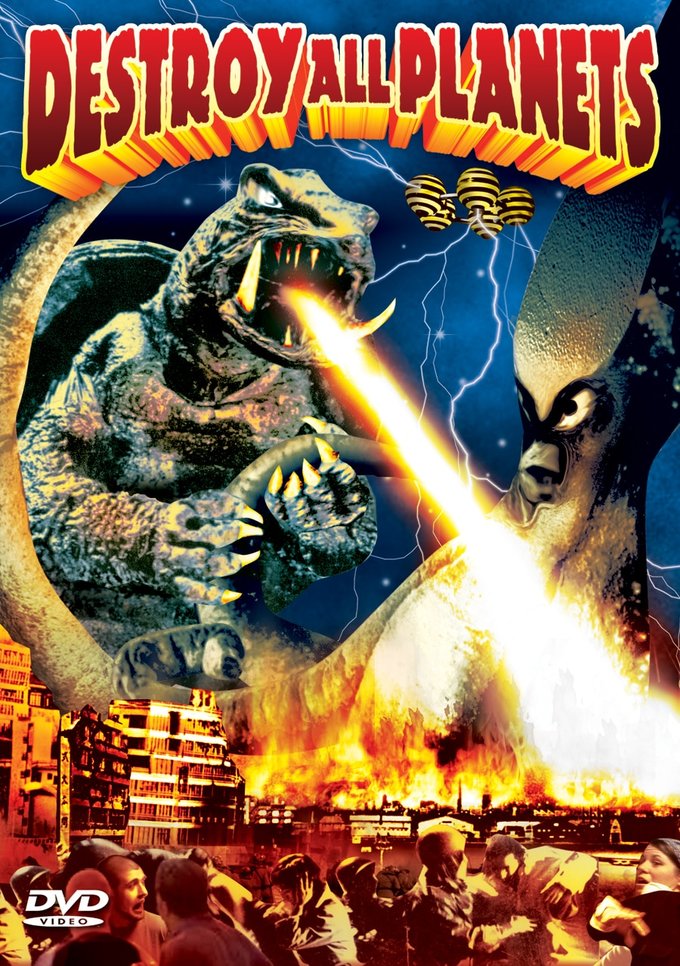 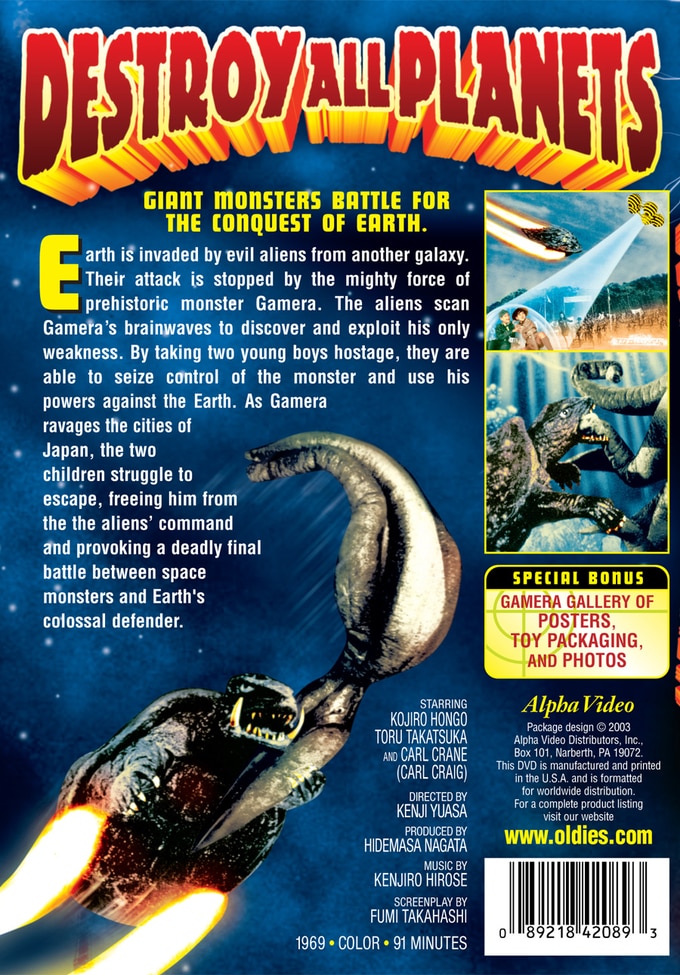 Earth is invaded by evil aliens from another galaxy. Their attack is stopped by the mighty force of prehistoric monster Gamera. The aliens scan Gamera's brainwaves to discover and exploit his only weakness. By taking two young boys hostage, they are able to seize control of the monster and use his powers against the Earth. As Gamera ravages the cities of Japan, the two children struggle to escape, freeing him from the the aliens' command and provoking a deadly final battle between space monsters and Earth's colossal defender.

When Earth is invaded by extraterrestrial beasts, giant, Earthbound, prehistoric Turtle Gamera stops their destructive assault. But when the aliens scan Gamera's brainwaves and find his only weakness, then they turn him against his own planet, and Gamera becomes a building-stomping terror.


okay i have to admit the part when the squid.viras.slices the heads of the japanese dudes freaked me out. but they turned out to be squids to so its okay for kids that can sit through the first half.
I LIKE GAMERA!!! but he's to soft on kids.
(warning to parents: the three battle scenes are graphic and bloody. gammera bites the neck of a bird thing and blood squirts every where. he also punches an ice lizard thing and blood squirts. he also gets impailed and his arm almost gets sliced off) enjoy!!!MONSTER BLOOD IS WHITE AND BLACK AND DARK GREEN it also looks died water


This is known as the first Gamera film having alien humanoids. It was the 4th in a series of 8 films (Gamera returned in 1995). This one may have an odd bad guy, being a squid and all, but for Gamera fans it's a classic. It's definately a great buy for only $5.95. If you enjoyed this you should check out Attack of the Monsters, the gamera film made after this one.

*GAMERA: LITTLE BRAVES comes out in Japan spring of 2006.*


I think this is one of the best Gamera pictures, and if you like Japanese Sci Fi this is a must have disc! Alpha have a few Gamera/Japanese Sci Fi films in their catalog, so why not collect 'em all???


Destroy All Planets(a.k.a Gamera vs. Viras) is a decent film. This is the start of the series becoming more child oriented. The story is about a couple of boys in the boy scouts being kidnapped by aliens and held hostage. They get Gamera to do their bidding because Gamera can't attack the ship with the boys inside. Overall, the movie is great, even if it's sort of childish, it doesn't effect the overall movie. What does hurt it is the stock footage. The movie is 90 min. long and it has 25 minutes of stock footage from the three previous movies. This can be boring if you have seen the previous movies before, and it spoils the previous movies if you haven't. So overall, the movie is good, if you can sit through 25 min. of old footage.


Admittedly, this is my first Gamera flick that I've ever purchased and, I must say, it was pretty enjoyable. I remember watching them when I was a kid but I don't remember them ever being this fun to watch. I've mostly collected Godzilla movies over the years(only got 8 more to collect) but, now, I'm going to start collecting Gamera movies as well. If you love Giant Monster movies, you're definitely going to like Destroy All Planets. It's awesome.


Decent selection from the Gamera series. Somewhat short-changed overall as it uses extensive use of previous Gamera movies for flash-back purposes, but I guess its part of the plot. My 6 year old son Ethan dug it, so I guess I have no real complaints. So many of the Toho monsters were over-shadowed by Godzilla, so it’s nice to see this release by Alpha Video. Not Oscar worthy, but still an entertaining movie typical of the late 1960’s.


Pretty cool movie, its the 4th installment in the ever faithful Daiei series "Gamera". In movie four, mankind finds itself once again plagued by evil alien monsters, hellbent on Universal Domination... This time the bad guys are the Virians, from the Planet Viras... To make a long story short, The Virian monsters take control of Gamera, using the Super Catch Ray and order the monster to destroy Japan (of course, its always Japan)... After all the destruction Earth manages to gain control of Gamera once again, thus leading to the all out slugfest that ensues... If your anykind of a Gamera or Kaiju fan at all, "Destroy All Planets" (Gamera vs. Viras) is a must see, although a bit campy, this is a winner in my eyes....