Attack of The Monsters 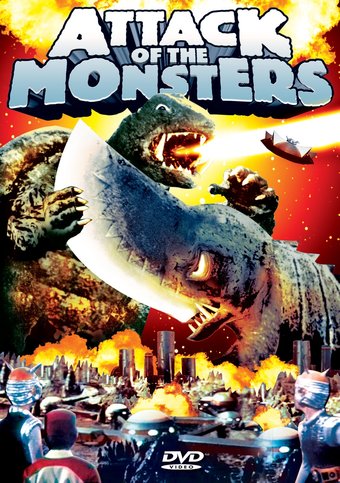 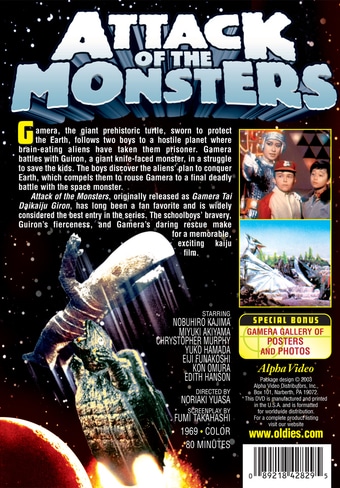 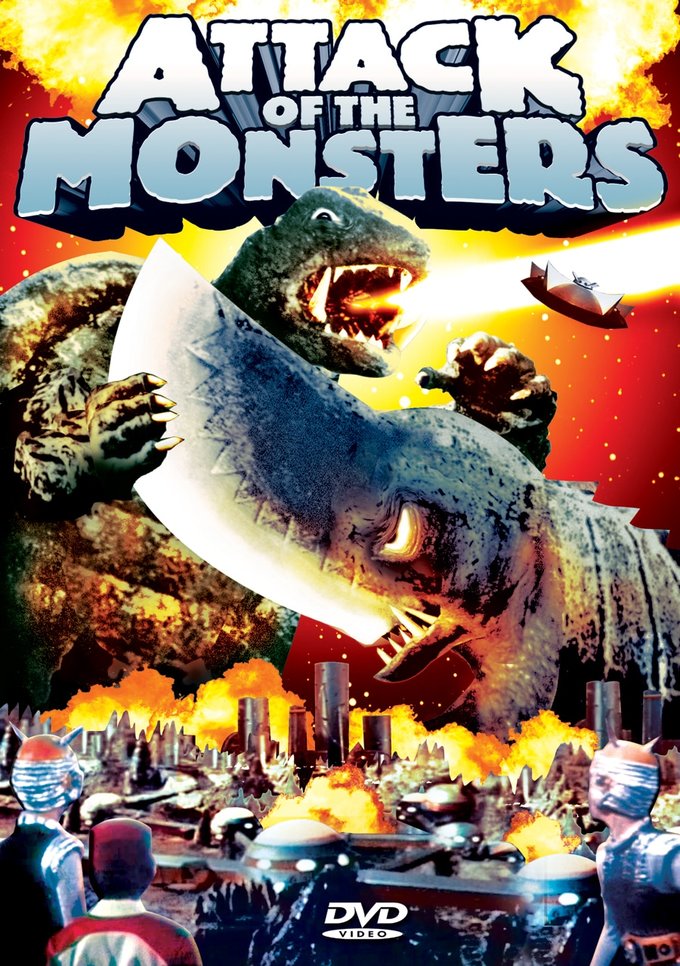 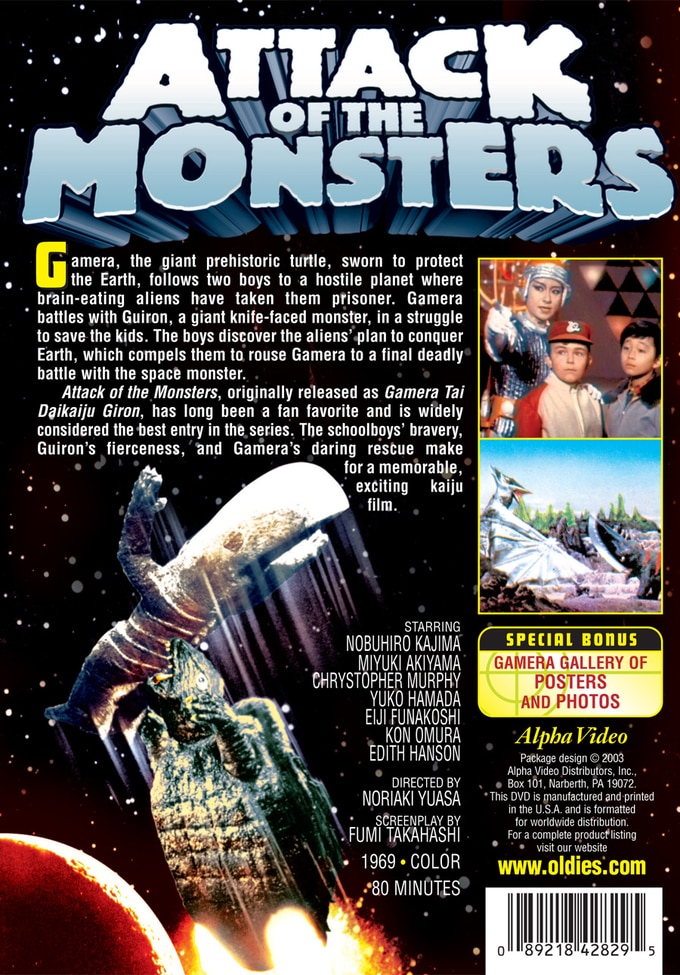 Gamera, the giant prehistoric turtle, sworn to protect the Earth, follows two boys to a hostile planet where brain-eating aliens have taken them prisoner. Gamera battles with Guiron, a giant knife-faced monster, in a struggle to save the kids. The boys discover the aliens' plan to conquer Earth, which compels them to rouse Gamera to a final deadly battle with the space monster.

Attack of the Monsters, originally released as Gamera Tai Daikaiju Giron, has long been a fan favorite and is widely considered the best entry in the series. The schoolboys' bravery, Guiron's fierceness, and Gamera's daring rescue make for a memorable, exciting kaiju film.

Gamera, the giant turtle with a soft spot for children, returns in this sequel to the original, GAMERA VS. GUIRON. Here, two boys, Akio and Tom, stumble upon a UFO and unwisely get in and start pushing buttons. Not surprisingly, the ship launches the boys into outer space where they are saved from certain death by Gamera. Landing on a planet inhabited only by two evil twin women who call themselves Terrans, the two boys find themselves about to become these Terran's main course. Of course, Gamera shows up to defend the two tykes and is challenged by the twins' pet monster. Thoroughly bizarre and somewhat surreal, ATTACK OF THE MONSTERS is a highly entertaining monster film that is a delight for fans of camp.

Action | Adventure | Aliens | Campy | Cult Film | Monsters | Science-Fiction | Cult | Alien Abductions
This product is made-on-demand by the manufacturer using DVD-R recordable media. Almost all DVD players can play DVD-Rs (except for some older models made before 2000) - please consult your owner's manual for formats compatible with your player. These DVD-Rs may not play on all computers or DVD player/recorders. To address this, the manufacturer recommends viewing this product on a DVD player that does not have recording capability.

Customer Rating:
Based on 142 ratings.


I have bought and watched nearly every gamera film spanning from his debut in 1965 to his most recent in 1999. Out of all his original 60s films this is the best one. If you like very light hearted and fun science fiction films this is for you. It even features scenes inspired by the olympics held in Japan a year before. By the way the new gamera film GAMERA: LITTLE BRAVES comes out in Japan this spring of 2006.


This film has many pleasures, from the surreal world of the planet on the other side of the sun, to good old knife-headed, shuriken-throwing Guiron himself! Gamera is the friend of little children, and after a few setbacks, he comes through at the end in spectacular fashion, making the universe a safer place!

Of course, the main attraction is those ruthless, yet adorable space girls, Flobella and Barbella. It's true they have designs on the kid's brains, but they are still a fascinating pair, with their arch looks, their exasperated "what now?" attitude at every setback, and their singlemindedness of purpose. Anyone who's seen ZARDOZ must wonder how those futuristic immortal hippies in that film have escaped the brain-munching attentions of F and B - that floating head is no match for Guiron!

This is a good print, and I've shaved off a half point only because this is the pan and scan American TV print. But you won't find the original Japanese print without spending lots more money (in fact, I even think it's part of some ridiculously expensive boxed set) so the Alpha print is the way to go. (Note: Although brain-eating is talked about, no brains are actually eaten. Fate frustrates F and B, as it seems to often have done in the past)

Excellent movie! One of the best in the series! Movie Lover: Stephen Pickren from Gillsville Georgia USA -- May, 7, 2004


This is it! The one of the best, if not the best, Gamera movies from the Showa series. Attack of the Monster(a.k.a Gamera vs. Guiron) is the fifth movie in the Gamera series and is incredible! This is a vast improvement over it's predecessor Destroy All Planets(Gamera vs. Viras). The story is fantastic. This is about children again, but it doesn't hurt the movie. The monsters on this movie a fantastic, Guiron is the monster with a blade for a head. He's extremely cool! But there is a second monster on here, we see the return of Gyaos. But this time it's a different kind of Gyaos, this is a silver Gyaos and is "Space Gyaos" to Gamera fans. Guiron and Space Gyaos fight each other, and the result is interesting. This is one of the most entertaining films in the Gamera Showa series. Watch this if you want to have fun!!!! This is definitely as good as Gamera The Invincible, Gamera vs. Barugon(War of the Monsters), and Gamera vs. Gyaos!