Gamera War of the Monsters (aka "Gamera vs. Barugon") 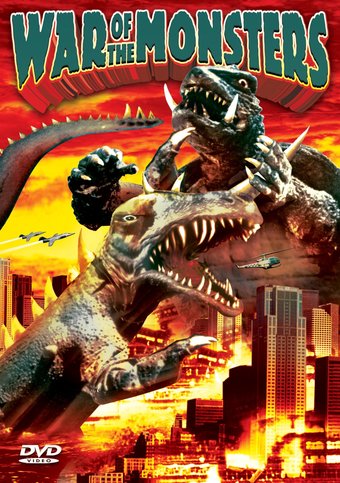 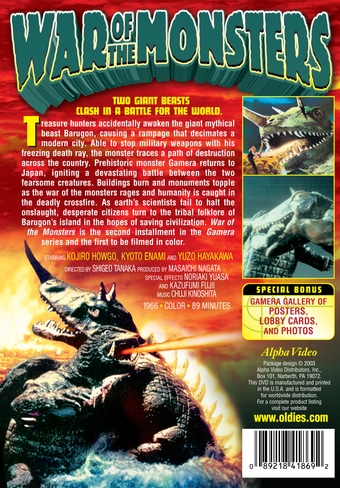 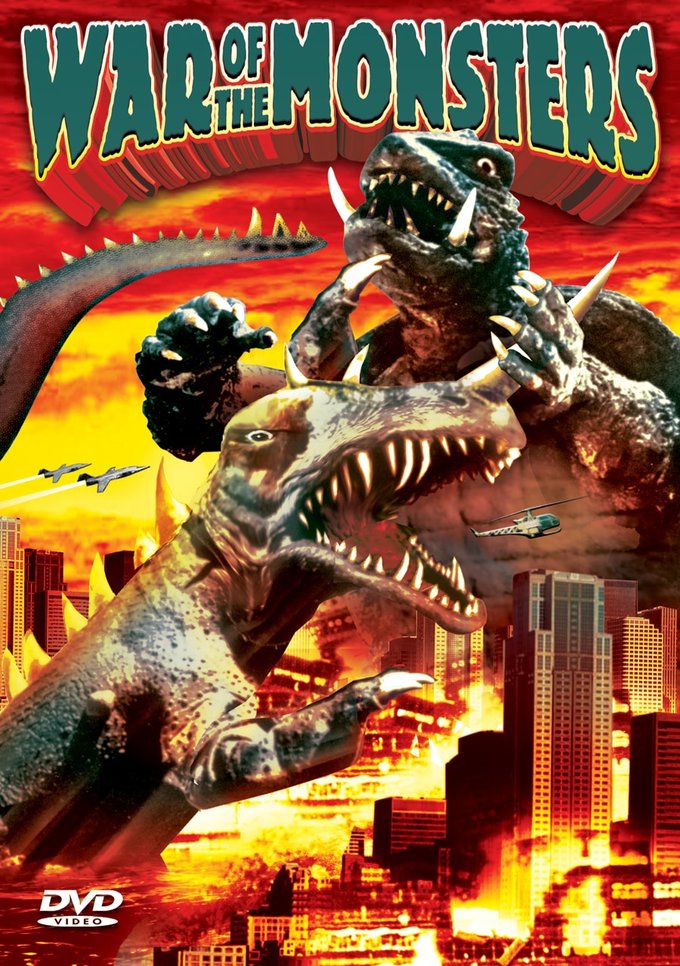 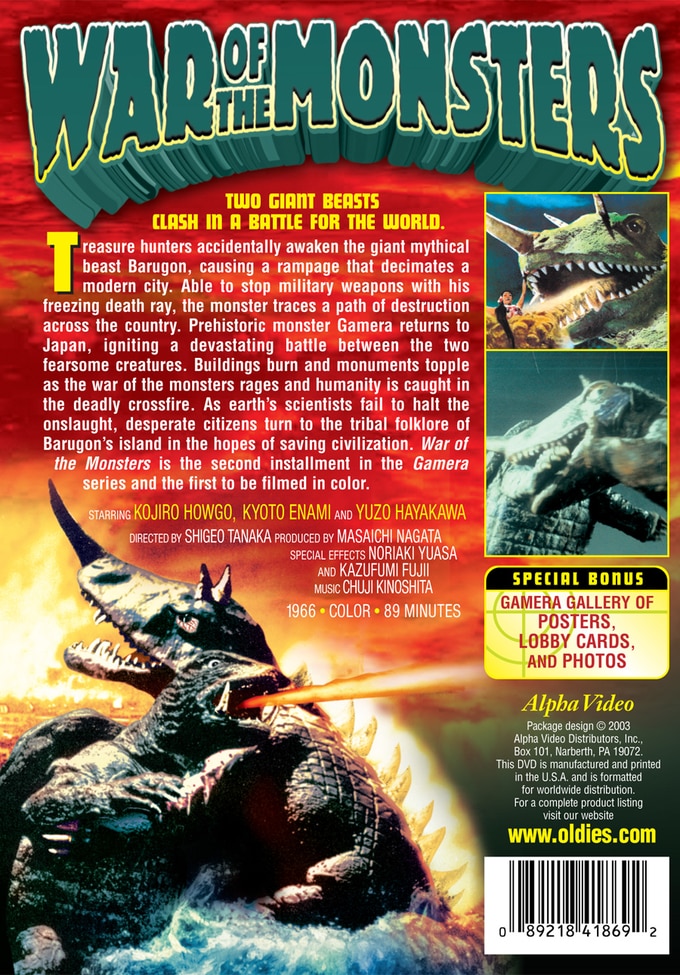 Two Giant Beasts Clash in a battle for the world! Treasure hunters accidentally awaken the giant mythical beast Barugon, causing a rampage that decimates a modern city. Able to stop military weapons with his freezing death ray, the monster traces a path of destruction across the country. Prehistoric monster Gamera returns to Japan, igniting a devastating battle between the two fearsome creatures. Buildings burn and monuments topple as the war of the monsters rages and humanity is caught in the deadly crossfire. As earth's scientists fail to halt the onslaught, desperate citizens turn to the tribal folklore of Barugon's island in the hopes of saving civilization. War of the Monsters is the second installment in the Gamera series and the first to be filmed in color.

In this sequel to Gamera, the dangerous turtle almost meets his match. He is a 263 foot long, dinosaur-like monster that emits freezing vapors from his mouth.

Monsters | Science-Fiction
This product is made-on-demand by the manufacturer using DVD-R recordable media. Almost all DVD players can play DVD-Rs (except for some older models made before 2000) - please consult your owner's manual for formats compatible with your player. These DVD-Rs may not play on all computers or DVD player/recorders. To address this, the manufacturer recommends viewing this product on a DVD player that does not have recording capability.


Gamera is in his first sequel, and what a sequal it is! Three men, one a crook, take an opal which eventually hatches into BAROGON! Meanwhile Gamera returns and both wreck havoc before fighting twice, the first time with Gamera loosing, the second time with Barogon losing. This is a great film, despite low-budet, and is worth buying.


I'm a huge fan of the 90's trilogy and have become a fan of the early movies as well. I originally didn't like this movie, but I watched it again and I loved it. This is definitely one of the best Showa Gamera films. This had nothing to do with children saving the day like the later movies would become. No kid in sight through the entire movie. This movie was amazing, some of the best fight scenes I have seen between Gamera and Barugon, and also some of the best fights scenes I have seen on a kaiju movie between the good and bad humans. Barugon's name is a rip off of Toho's Baragon, but the monster itself is original and amazing. This and the first movie Gamera the Invincible is definitely the two movies to watch if you're new to the Showa Gamera world.


I'd have to say, that aside from the newest of the Gamera flicks, "War of the Monsters" (Gamera vs. Barugon) would have to be my favorite. I like the film because it really doesn't portray Gamera as the "Friend to all Children" that the following titles do (Gamera vs. Viras, Gamera vs. Gyaos, Gamera vs. Guiron, Gamera vs. Jiger and Gamera vs. Zigra), and that to me is a big plus. Instead, Gamera is portrayed more like he's a natural disaster in my opinon, and the monstrous Barugon is another beasty that happens to be in the way.... The film starts off with the discovery of an enormous "Opal", that is brought back to Japan (Kobe to be exact). Soon, after being exposed to infrared beams the opal hatches, thus released Barugon, the unstoppable monster of myth and fabel (also the first of many Gamera foes)... Chaos and horror follow, and soon the two Behemoths meet in an all-out battle to the death... Who will win??? Find out in the final battle of "War of the Monsters".....


THIS IS A GOOD MOVIE OF YOU LIKE GAMMERA THE CORRECT TITLE IS GAMMERA VS BEARAGON, THIS HAS A GOOD STORY AND OVER ALL FUN, KIND OF LIKE THE MOVIE GODZILLA VS THE THING, DIFFERENT MONSTER ALMOST SAME STORY.