Time to rock it from the Delta to the DMZ! 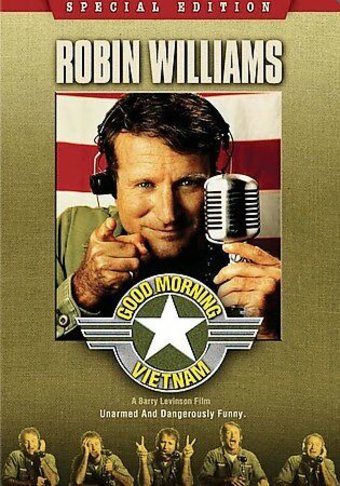 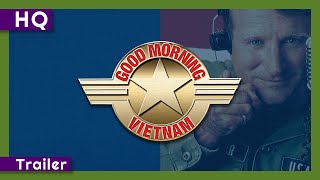 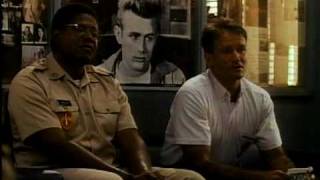 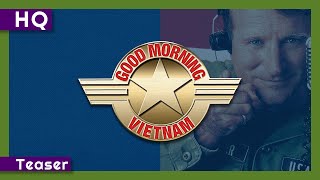 Imported by the military to host an early a.m. radio show, Cronauer (Williams) blasts the formerly serene, sanitized airwaves with a constant barrage of rapid-fire humor and the hottest hits from back home.

In GOOD MORNING, VIETNAM, which is based on a true story, Cronauer (Robin Williams) is a nonconformist with a wicked sense of humor who is transferred from Crete to Saigon. Outrageous and over the top, Cronauer speaks in accents, creates characters, pokes fun at everyone--including the President--and spins banned rock and roll tunes. While his antics amuse the masses, they also put him in hot water with his superior officers, particularly Lt. Steven Hauk (Bruno Kirby), who would prefer that the radio show be censored, sanitized, and completely noncontroversial. Cronauer takes his show outside the radio station when he starts to teach Vietnamese locals English in an effort to meet pretty, demure Trinh (Chintara Sukapatana). He befriends Trinh's brother, Tuan (Tung Thanh Tran), who becomes an unlikely comrade in uncertain times. Directed by Barry Levinson (DINER, AVALON), the film features a tour-de-force performance from Williams, who improvised much of the comedy used in the radio shows, earning an Academy Award nomination for Best Actor.

Good Morning Vietnam
Academy Award(R)-winner Robin Williams shakes up 1965 Saigon in the role critics agree he was born to play -- irreverent, nonconformist deejay Adrian Cronauer. Imported by the Army for an early a.m. radio show, Cronauer blasts the formerly staid, sanitized airwaves with a constant barrage of rapid-fire humor and the hottest hits from back home. The G.I.s love him -- but the brass is up in arms! Riddled with sidesplitting comic bombshells and studded with hot '60s hits, the film depicts Cronauer's raucous Saigon adventures amid a world gone mad. GOOD MORNING VIETNAM is a direct hit -- the classic Robin Williams comedy!