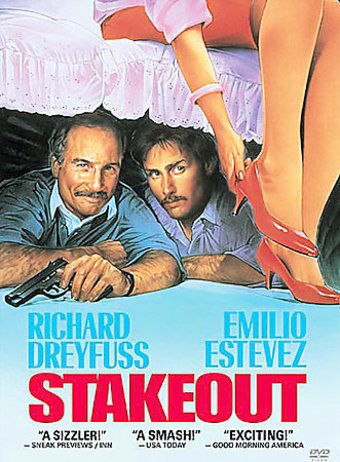 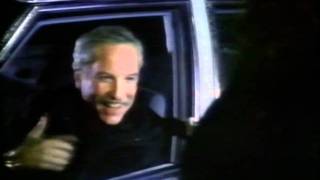 While on an FBI stakeout, detective Chris Lecce (Richard Dreyfuss) falls hard for Maria (Madeleine Stowe), the woman he's supposed to be watching. Soon he's inside her home enjoying a torrid love affair, while his young partner Bill Reimers (Emilio Estevez), waits across the street, looking through his binoculars and fuming. But the woman's ex-boyfriend (Aidan Quinn), a crazed, escaped convict who is the real object of the stakeout, is on his way back to see her and poses a very dangerous threat to the new couple. Director John Badham's entertaining blend of action and humor highlights the comic timing and chemistry between Dreyfuss and Estevez, who deliver first-rate performances.

Stakeout
Acclaimed director John Badham delivers a winning combination of action, suspense, comedy, and romance! Convinced that a danerous escaped convict (Aidan Quinn) is headed for his ex-girlfriend's (Madeleine Stowe), a pair of Seattle detectives (Richard Dreyfuss, Emilio Estevez) stakeout her apartment. The watch remains routine until one of the detectives begins a high-risk romance with the woman under surveillance -- jeopardizing not only the partners' careers ... but also their lives!

Richard Dreyfuss and Emilio Estevez star as Chris Lecce and Bill Reimers, two Seattle detectives who are assigned to a routine stakeout of a woman's home (Madeleine Stowe) when her ex-boyfriend (Aidan Quinn) escapes from jail and the FBI suspects he will try to contact her. However, while watching over the house Chris falls in love with the unsuspecting woman and risks their jobs, as well as their lives, in this highly entertaining action/comedy by director John Badham.

Down and Out in Beverly Hills (DVD)
$5.80 Super Savings
Add to Cart