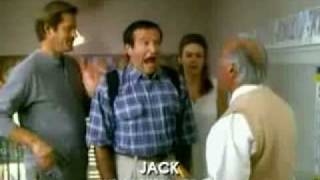 This bittersweet story of childhood innocence and friendship stars Robin Williams as Jack Powell, a boy who grows four times faster than normal. By the time Jack reaches his 10th birthday, he looks like a 40-year-old man. After years of being tutored at home by Mr. Woodruff (Bill Cosby), Jack convinces his overprotective parents (Diane Lane and Brian Kerwin) to send him to public school. The children are less than friendly, but with the help of his fifth grade teacher (Jennifer Lopez), Jack wins the kids over. Robin Williams is heartbreaking as a 10-year-old overcoming a unique physical disability.

Jack
Comedy favorite Robin Williams (FLUBBER, BICENTENNIAL MAN) lights up the screen in JACK, the acclaimed hit that had critics and audiences cheering! Williams stars as a mischievous 10-year-old who acts like any other boy his age, except he's in a grown-up's body. It's nonstop laughs as Jack embarks on the greatest adventure of his young life ... the fifth grade. In his wildest role ever, Williams takes you on a hilarious ride as Jack explores the ups and downs of life from a kid's point of view! With Bill Cosby (TV's THE COSBY SHOW), and sexy Fran Drescher (TV's THE NANNY), Diane Lane (UNDER THE TUSCAN SUN), and Jennifer Lopez (JERSEY GIRL) -- join the millions of moviegoers who loved this outrageous comedy hit!

Francis Ford Coppola directed this sweet tale about a young boy's determination to enjoy his childhood. After an odd 10-week pregnancy, Karen Powell (Diane Lane) gives birth to a healthy, seemingly normal baby boy. But this infant, Jack (Robin Williams), is no ordinary child: Jack's body grows at four times the normal rate. At 10 years old Jack has the appearance of a 40-year-old, including a five o'clock shadow and hairy knuckles. Jack's home-schooling tutor (Bill Cosby) is his only friend until he convinces his parents to let him attend fifth grade at the local public school. At first Jack isn't too popular; the other kids call him "giant" and "freak." But thanks to the encouragement of his teacher (Jennifer Lopez), he keeps trying. Shrewdly, Jack uses his condition to his advantage: playing center for the fifth grade basketball team, buying porno magazines for his new friends, and posing as the school's principal. As Jack's mind grows at the normal rate mentally and emotionally, his body continues to age rapidly. A joy to watch, Robin Williams playfully captures the youthful exuberance of a 10-year-old trapped in an adult's body.

The Other Sister
$5.80 Super Savings
Add to Cart

Honey, We Shrunk Ourselves (DVD)
$5.80 Super Savings
Add to Cart