Bonanza Adventures with the Cartwrights (4-DVD) 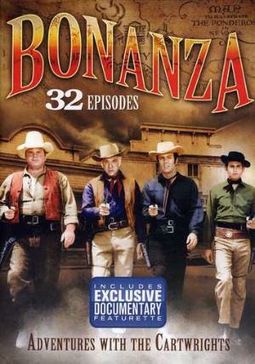 The Cartwright's thousand-square-mile Ponderosa Ranch is located near Virginia City, Nevada, site of the Comstock Silver Lode, during and after the Civil War. Each of the sons was born to a different wife of Ben's; with none of the mothers still alive. Join Ben (Lorne Greene), Adam (Pernell Roberts), Hoss (Dan Blocker) and Little Joe (Michael Landon) as they rewrite the book on the western genre. These were the days where family values and the fight for justice were backed up by six-guns that always had right on their side.

Included in this set are 31 memorable episodes of this 14 season television phenomenon. Also included in this 4-DVD set is a brand new, never-before-seen documentary chronicling the fascinating legacy of this landmark TV show.

This four-disc set contains 32 episodes of the long-running television series BONANZA, as well as a documentary about the making of the classic boob tube oater. Among the episodes included are THE FEAR MERCHANTS, DEATH AT DAWN, BREED OF VIOLENCE, and THE SPITFIRE.