The most outrageous of 'em all. 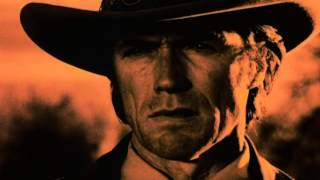 "I don't take kindly to kids playing hooky from school. I think every kid in America ought to go to school, at least up through the eighth grade."--Bronco Billy (Clint Eastwood) to a group of adoring children
"We don't go to school today, Bronco Billy. It's Saturday."
- one child responds

Clint Eastwood's BRONCO BILLY is a funny and poignant depiction of one man's quixotic devotion to the code of the Old West and traditional American values. Billy (Eastwood) leads his ragtag crew of performers as they travel the countryside, putting on their bare bones Wild West show for sparse crowds. Billy's not an easy man to work for, and he and his bunch barely make a living, but they are pursuing their dreams. When Antoinette Lily (Sondra Locke, in a somewhat shrill performance), a snooty heiress abandoned by her husband, joins the group, their luck seems to run out, and Billy has to find a way to keep them together. As in THE OUTLAW JOSIE WALES, Eastwood plays the patriarch of an ethnically diverse makeshift family. It would be easy to dismiss Billy, to laugh at his corny devotion to outmoded values and old-fashioned entertainment. Like Eastwood himself, Billy's not even a real cowboy. But, gradually, the audience comes to admire him for his fierce devotion to his crew and his insistence on showing the "li'l pards" in his audience not just a good time but also a dream of striving to live life as who they want to be.

A Wild West show entrepreneur leads his ragtag troupe on one misadventure to another in hopes of gaining fame and fortune.