The story of three men -- Benito Juarez, Napoleon III and Emperor Maximilian -- driven by political passions and of a woman, Empress Carlota, driven to madness. Set against a backdrop of revolution and royal ambition, with Mexico as the prize. 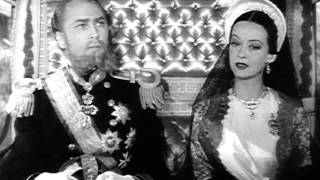 Juarez is the story of three men -- Benito Juarez (Paul Muni), Napoleon III (Claude Rains) and Emperor Maximilian (Brian Aherne) -- driven by political passions. And of a woman, Empress Carlota (Bette Davis), driven to madness. John Garfield and Gale Sondergaard join the illustrious cast of this epic set against a backdrop of revolution and royal ambition, with Mexico as the prize. All the leads earned critical plaudits, but many reviewers singled out Davis for one bravura sequence in which, as the mentally fragile Empress, she confronts Napoleon, demanding he save her husband's life. "Her final flitting away into the darkness of madness is the most unforgettable moment in the picture" (James Shelley Hamilton, National Board of Review).

The last of the series of William Dieterle's well-made series of biopics at Warners, which included THE STORY OF EMILE ZOLA and THE LIFE OF LOUIS PASTEUR, JUAREZ was intended to convey a warning to Hitler about the danger of European incursions into Latin America. Although the film was originally supposed to focus on Maximilian, Muni's choice of the part of Juarez made it the starring role and altered the nature of the film. Hapsburg emperor Maximilian (Brian Aherne) and his high-strung wife, Carlotta (Bette Davis), arrive in Mexico in the 1850s at the behest of France's emperor Louis Napoleon III (Claude Rains), who wishes him to assume power and secure the country as a French colony. But the Europeans have severely underestimated the tremendous popularity of the Zapotec Indian statesman, who is the duly elected president. Although they are able to remove him from office with the backing of the French army, Juarez retaliates with a guerrilla force, to the surprise and consternation of Maximilian. Despite a well-intentioned attempt to show a Latin figure in a positive light, Muni's expressiveness is limited by heavy makeup, and John Garfield is seriously miscast as Porfirio Diaz, in a film that is often heavy going. Davis and Rains, however, are typically excellent in their roles.

Based on the novel THE PHANTOM CROWN by Bertita Harding, the film stars Paul Muni as Benito Juarez, a Zapotec Indian who struggles to free his native Mexico from the shackles of colonialism. When Hapsburg emperor Maximilian and his wife, Carlotta, are sent there to establish a puppet government by Louis Napoleon III in the 1850s, they are surprised to find themselves threatened by the overwhelming popularity of the native statesmen.

23%off
Background to Danger
$9.95 BLACK FRIDAY
Add to Cart