Joyce Heath's name in lights once meant long lines at the box office. Then the Broadway star's luck changed. Her shows folded and romances ended. She spent her days in a self-destructive stupor, until a new romance put her on the road to recovery ... 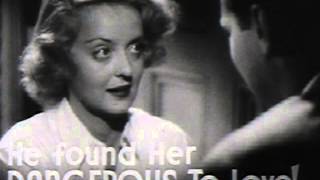 Joyce Heath's name in lights once meant long lines at the box office. Then the talented Broadway star's luck changed. Her shows folded. Her romances ended. And Joyce spent her days in a self-destructive stupor. But a new romance puts her on the road to recovery and holds the promise of marriage -- if she can get her current husband out of the way.

As Joyce, Bette Davis is in love and murderously dangerous in this atmospheric melodrama co-starring Franchot Tone. "The script had just enough material in it to build into something," the actress recalled. "I worked like 10 men on that film." As a result, she earned one of those highly coveted little gold men: the 1935 Academy Award statuette for Best Actress, her first in a trailblazing career so linked to the studio's success that Davis would be called "the fourth Warner Brother."

Tempestuous former Broadway star Davis, now an alcoholic, gets another chance when an admiring architect falls in love with her and breaks off his engagement to the wealthy socialite who adores him. He even bankrolls her comeback, but Davis harbors a secret that could put an end to plans. Davis's first Oscar-winning role.