Married to a gangster at 15... widowed by the St. Valentine's Day Massacre... remarried to a playboy... forsaken... left to raise her baby alone: Mary Donnell leads the kind of three-hanky life just made for a prestige '30s melodrama. 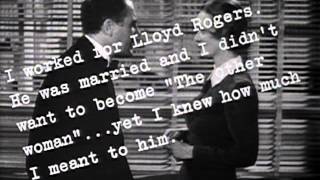 Married to a gangster at 15...widowed by the St. Valentine's Day Massacre...remarried to a playboy... forsaken...left to raise her baby alone: Mary Donnell (Bette Davis) leads the kind of three-hanky life just made for a prestige '30s melodrama. Besides showcasing one of her most subtle and moving portrayals, That Certain Woman marks important firsts for Davis. It was her first film with Henry Fonda, her co-star in the following year's celebrated Jezebel. And it was the first time she worked with Edmund Goulding, who would guide her in Dark Victory, The Old Maid and The Great Lie. "He was one of Hollywood's greatest directors," Davis said in the bestselling biography Mother Goddam by Whitney Stine. "Goulding made me special in this film. I looked really like a 'movie star.'"

Bette Davis selflessly endures all manner of womanly woes in director Edmund Goulding's remake of his own silent film, THE TRESPASSER. As Mary, a gangster's widow trying to go straight, she works loyally and hard for a married lawyer (Ian Hunter), goes to night school, and falls in love with rich, irresponsible Jack (Henry Fonda). When she and Jack try to elope, his controlling dad (Donald Crisp) tracks them down and annuls their marriage, accusing her of gold-digging based on her tawdry past. Mary's too proud to ask for a cent in alimony, or to mention she's pregnant with Jack's child. Instead she has the child in secret, and winds up the center of a scandal when her boss dies and leaves her all his money. It's excessively melodramatic for sure, but Davis makes the overwrought pathos enjoyable thanks to her superb acting chops. She has some good support in this department from Anita Louise as a wheelchair-bound socialite and Mary Phillips as Mary's long-suffering companion. Sidney Toler, out of his Charlie Chan makeup, also gives a brief appearance as a detective hired by Jack's father.

Mary Donnel (Bette Davis), a young woman with a tragic history, spurns her employer's advances and instead, marries a rich young man. after spurning the advances of her employer. But then her life takes a series of melodramatic turns, involving her spiteful father-in-law, an annulment, her boss' illness, a fateful car accident, a child custody battle, and of course, her sordid past. Will Mary live happily ever after'