Nominated in 2000 for ten Academy Awards, and winner of four. 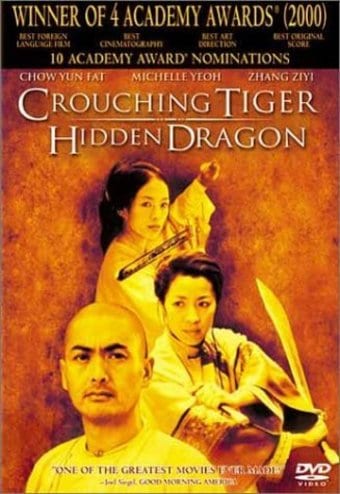 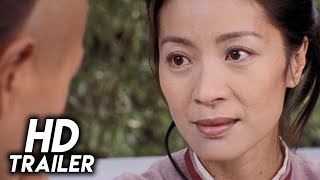 "It only looks pure because blood washes so easily from its blade."
- Li Mu Bai (Chow Yun Fat) to Yu Shu Lien (Michelle Yeoh)
"When it come to emotions, even great heroes can be idiots."
- Sir Te (Lung Sihung) to Yu
"Your master underestimated us women. Sure, he'd sleep with me, but he would never teach me. He deserved to die by a woman's hand!"
- Jade Fox (Cheng Pei-pei) to Li
"You know what poison is' An eight-year-old girl, full of deceit. That's poison. Jen, my only family...my only enemy."
- Jade Fox to Jen (Zhang Ziyi), Li, and Yu
"I would rather be a ghost, drifting by your side...as a condemned soul...than enter heaven without you. Because of your love...I will never be a lonely spirit."
- Li to Yu

Known for making films about familial relationships, director Ang Lee surprised everyone with his martial arts epic CROUCHING TIGER, HIDDEN DRAGON. Based on a novel by Wang Du Lu, CROUCHING TIGER starts with the revenge plot common in the wuxia stories that Lee loved as a child, then adds a feminist twist. Li Mu Bai (Chow Yun Fat) is a legendary martial artist who has decided to pass on his sword, the Green Destiny, to a friend. Soon afterward, the sword is stolen by a masked female, setting in motion events that test the bonds of family, love, duty, and sisterhood. Chow appears with three generations of female stars: Cheng Pei Pei, a 1960s action heroine; Michelle Yeoh, the beauty queen turned 1980s action goddess; and newcomer Zhang Ziyi, who smolders as the princess who wants more than domestic tranquillity. Famed action choreographer Yuen Woo-Ping (THE MATRIX) stages jaw-dropping zero-G fights across rooftops, rivers, and bamboo trees, while Yo-Yo Ma punctuates the fisticuffs with dramatic cello solos. Described by Lee as "SENSE AND SENSIBILITY with martial arts," CROUCHING TIGER recalls the best wuxia films of the 1960s and pushes the genre in new directions.