The story of a man who could only count to #1 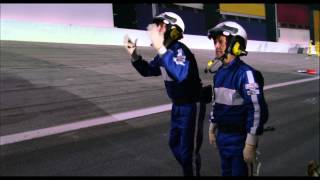 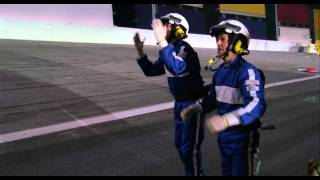 Though it is one of America's most popular sporting events, the association of NASCAR with uneducated, backwards rednecks seems cemented into the American consciousness. So the brilliant comedy TALLADEGA NIGHTS: THE BALLAD OF RICKY BOBBY, is not just a sidesplitting series of slapstick pratfalls and over-the-top accents, but a lens into an important part of American culture. Comic sensation Will Ferrell (SATURDAY NIGHT LIVE, ANCHORMAN) plays the title character, Ricky Bobby, a figure who is at once laughably ridiculous, infuriating, and loveable. Ricky Bobby, with his bleached-blond wife, cute sons Walker and Texas Ranger, and dim-bulb sidekick Cal (award-winning actor John C. Reilly, flexing his considerable comedic muscle), has got it made. He is NASCAR's most popular driver, and nearly every aspect of his life is endorsed by a recognizable product. Yet his racetrack kingdom is not unshakeable: two formidable opponents, his unpleasable father, Reese (Gary Cole), and a flashy new opponent, the openly gay French import Jean (played by a hilarious Sasha Baron Cohen, known to millions as Ali G), threaten to hijack his crown and expose his vulnerabilities. Though many of the jokes are easy laughs (having Ferrell run around shirtless is a guaranteed guffaw-fest), the script (co-written by Farrell and Adam McKay) is nuanced and intelligent, lending its characters much more sympathy and complexity than dumber comedies are want to do. And every performer--from Ferrell to Amy Adams (as Susan, Bobby's fawning assistant)--tackles his or her part with joy and relish. A knee-slapper with smarts and savvy, TALLADEGA NIGHTS ensures Ferrell's position as one of comedy's shining talents.