Q: 3 stars out of 5 - "...A timely reminder of the amazing diversity and sheer quality of [their] output over 4 studio albums in an amazing 3-year period....exhilarating..." 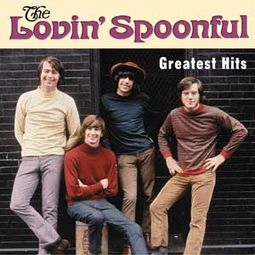 The Lovin' Spoonful: John Sebastian, Zal Yanovsky, Joe Butler, Steve Boone, Jerry Yester.
Producers: Erik Jacobsen, Chip Douglas, The Lovin' Spoonful, Joe Wissert, Jack Lewis.
Compilation producer: Rob Santos.
Recorded from 1965-1968. Originally released on Kama Sutra. Includes liner notes by Ben Edmonds.
Digitally remastered by Bob Irwin (Sundazed Studios, Coxsackie, New York).
Liner Note Author: Ben Edmonds.
Photographers: Henry Diltz; Don Paulsen.
The Lovin' Spoonful was one of the very first bands to take part in the folk-rock boom of the mid-1960s, creating something of an East Coast equivalent to the Byrds' seminal L.A. jangle. The original group's lineup was regrettably short-lived, all their classic material getting released on Buddha records, so the label's definitive GREATEST HITS collection presented none of the usual cross-licensing difficulties.
All the highlights of the Spoonful's '60s discography are here--the airy, transcendent pop of the jubilant "Do You Believe in Magic" and the almost Association-like "You Didn't Have to Be So Nice," the tougher rock sound of "Summer in the City," the romantic ballad "Darling Be Home Soon," and more. The rootsier side of the ensemble can be heard as well, on the likes of "Did You Ever Have to Make Up Your Mind" and "Jug Band Music." Led by John Sebastian's mellifluous voice and graceful songwriting and Zal Yanovsky's chiming guitar, the Spoonful turned out some of the most memorable singles of the '60s, and they're all right here.

Customer Rating:
Based on 62 ratings.


Excellent musicians whose lyrics take you back to a more innocent time---a fine collection from the Lovin' Spoonful.

54%off
The Peanut Butter Conspiracy
For Children of All Ages - A Golden Classics Ed.
$5.98 on Sale
Add to Cart
(7)

39%off
The Mamas & the Papas
The Ultimate Collection
$10.98 Super Savings
Add to Cart