Dr. Rodney Barrett is shoveling dirt in a spooky cemetery at night hunting for the coffin holding his young daughter - his still living young daughter. She's buried alive, an anonymous caller reported. And he has mere hours to find and rescue her. 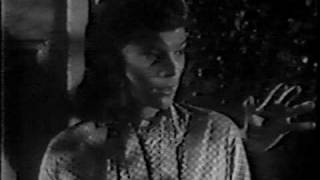 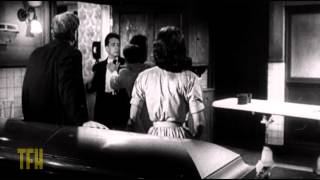 Why is Dr. Rodney Barrett shoveling dirt in a spooky cemetery at night? He's hunting for the coffin holding his young daughter - his still living young daughter. She's buried alive, an anonymous caller reported. And Barrett has mere hours to find and rescue her. Events of an even more unusual bent will follow in this shocker that began William Castle's string of fright films (including House on Haunted Hill and The Tingler) that relied on memorable promotions to grab interest and box-office dollars. The gimmick here: filmgoers were insured by Lloyds of London for $1000 should they die of fright while seeing the movie. No insurance offered with this DVD. But in a way the film's closing credits are, well, to die for.

This first "gimmick" outing from horror producer William Castle is mainly distinguished by the clever ad campaign promising $1000 insurance for each patron (from Lloyds of London, no less!) against the possibility that they may die of fright during a screening of the film. (A similar gimmick would later be employed by the producers of the less imaginative thriller THE SCREAMING SKULL, who promised patrons an all-expense-paid funeral.) Castle certainly had nothing to worry about, since there is nary a moment of heart-stopping terror to be found in MACABRE. That said, the plot is consistently entertaining, involving small-town doctor Rod Barrett (William Prince) racing the clock to locate his missing daughter after she is buried alive in the town cemetery by the same psychopathic killer who murdered his wife and her sister. It's clear that Castle had not yet honed his talents as a huckster of cheap thrills -- which reached their cheesy apex in THE TINGLER -- but there is definitely a spark of mischief here.

Death | Small Towns | Conspiracies | Families
This product is made-on-demand by the manufacturer using DVD-R recordable media. Almost all DVD players can play DVD-Rs (except for some older models made before 2000) - please consult your owner's manual for formats compatible with your player. These DVD-Rs may not play on all computers or DVD player/recorders. To address this, the manufacturer recommends viewing this product on a DVD player that does not have recording capability.

I Saw What You Did
$9.10 Super Savings
Add to Cart

The Abominable Snowman of the Himalayas (Blu-ray)
$26.20
Add to Cart