Eye of the Devil

An innocent outsider to an enclosed world peels back layers of mystery to reveal a shocking truth. The wife of a troubled marquis discovers - perhaps too late - that her husband's ancestral chateau is home to witches, warlocks ... and terror. 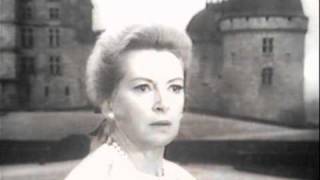 A forbidding French chateau and its surrounding vineyards are the setting for Gothic thrills in this haunting excursion into the occult. Deborah Kerr and David Niven, costarring for the first time since Separate Tables, lead an exceptional cast (Sharon Tate, Donald Pleasence, Flora Robson, David Hemmings, Edward Mulhare, Emlyn Williams) in a chiller reminiscent of the later The Wicker Man, in which an innocent outsider to an enclosed world peels back layers of mystery to reveal a shocking truth. Kerr plays the outsider, the wife of a troubled marquis (Niven), who discovers - perhaps too late - that her husband's ancestral chateau is home to witches, warlocks, a sinister priest, 12 hooded figures... and terror.

A fine cast distinguishes this unusual supernatural thriller. When London-based vintner Phillippe de Montfaucon (David Niven) receives the bad news that dry weather is expected to destroy crops in his vineyard in France for the third year in a row, he immediately leaves for his castle on the continent, Bellenac, instructing his wife Catherine (Deborah Kerr) to stay behind with their children. However, Catherine's curiosity gets the better of her and she arrives at Bellenac to discover that the villagers who tend the grapes and watch the castle are members of a pagan cult, and that they believe the death of Marquis may be required for the future health of the crops. While pre-release editing left its narrative a bit fragmented, EYE OF THE DEVIL is certainly notable for its cast, which includes Donald Pleasance, Edward Mulhare, David Hemmings, and Sharon Tate. Kim Novak was originally cast as Catherine, but was forced to bow out midway through shooting due to an injury.

Cult Film | Supernatural | Families
This product is made-on-demand by the manufacturer using DVD-R recordable media. Almost all DVD players can play DVD-Rs (except for some older models made before 2000) - please consult your owner's manual for formats compatible with your player. These DVD-Rs may not play on all computers or DVD player/recorders. To address this, the manufacturer recommends viewing this product on a DVD player that does not have recording capability.