A sleepy New England town harbors a community of the undead -- a horde of blood-frenzied vampires who've kept their ghoulish identities hidden for more than 300 years. 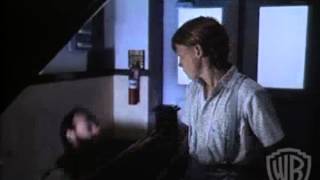 In a certain New England town, it's hard to keep the undead down. It's shocking story continues courtesy of Larry Cohen, a maestro of cinematic horror (the It's Alive trilogy) and writer of police-action thrillers (Best Seller, Maniac Cop), tapping into his senses of the macabre as well as satire in a clever chiller based on characters created by Stephen King. Joining in to bedevil and terrify are Michael Moriarty as an anthropologist asked to write a "bible" for the town's ghastly group, Andrew Duggan as the leader of the town folk (including June Havoc and Evelyn Keyes) who hide their blood-feasting bent behind sweet exteriors and filmmaker Samuel Fuller in a rare on-screen role as a vampire hunter. For mortals who occasionally like to go to the devil - and come back - A Return to Salem's Lot is one terrific terror trip.

An anthropologist and his young son learn the dreadful secret of a deceptively peaceful village and discover they're next in line for the gift of eternal life as a vampire. They are joined in their struggle against the forces of the undead by a Nazi hunter. Based on a novel by Stephen King.

Vampires
This product is made-on-demand by the manufacturer using DVD-R recordable media. Almost all DVD players can play DVD-Rs (except for some older models made before 2000) - please consult your owner's manual for formats compatible with your player. These DVD-Rs may not play on all computers or DVD player/recorders. To address this, the manufacturer recommends viewing this product on a DVD player that does not have recording capability.

Dracula: Dead and Loving It
$12.90 Super Savings
Add to Cart

Customer Rating:
Based on 11210 ratings.