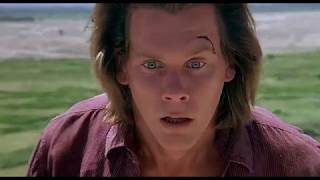 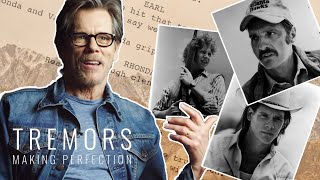 The race to higher ground is on when two handymen and a local seismology student discover that their little town of Perfection, Nevada, is infested with stinky subterranean man-eating worms. Starring Kevin Bacon, Fred Ward, and Michael Gross, TREMORS is a well-done comedy-horror film that salutes a host of horror films from bygone years. Fans of the movie will enjoy the sequels starring Gross: TREMORS 2: AFTERSHOCKS, TREMORS 3: BACK TO PERFECTION, and TREMORS 4: THE LEGEND BEGINS.

A couple of luckless dreamers leave the small town of Perfection and cross the desert in search of odd jobs. Instead of a pot of gold, they find worms... humungous man-eating worms that tunnel underground and eat everything in sight, from men to automobiles. With quick thinking -- and a conveniently placed cement wall -- the duo outwit the hungry sand beasts. Back home they brag of their escape to the weird collection of townsfolk. A seismologist who just happens to be studying the area tells them there are lots more of the creatures hanging around. And, like everybody else, the worms are aiming for Perfection...