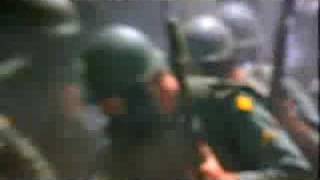 Brett Morgen follows up his dazzling THE KID STAYS IN THE PICTURE with another daring, inventive work of nonfiction. CHICAGO 10 tells the raucous story of the trial that resulted after the tumultuous Democratic Convention in Chicago in 1968. During the convention, a group of Yippies and other confrontationists pulled off a series of sit-ins and pranks that led to an eruption of violence. The result was a trial that simultaneously amused, thrilled, and challenged the nation and our notions of freedom. The supposed leaders of these insurrections became defendants, who used their position in the spotlight to further provoke the powers-that-be. They included Abbie Hoffman, Jerry Rubin, Bobby Seale, David Dellinger, Tom Hayden, Rennie Davis, John Froines, and Lee Weiner.

In addition to providing a solid historical context using stock footage of actual events, Morgen takes Rubin's claim that the trial was a cartoon to a literal level by recreating the trial's most infamous moments in full-blown animation. Famous voices (Hank Azaria, Nick Nolte, Dylan Baker, Mark Ruffalo, Roy Scheider, Jeffrey Wright, Liev Schrieber) provide the energetic dialogue that brings these scenes to electrifying life. Morgen also uses a sonic onslaught of aggressive modern pop music (Eminem, Beastie Boys, Rage Against the Machine) to remind younger viewers that at the time, these were the voices of genuine anti-authority. CHICAGO 10 works as an invigorating history lesson that aims to wake viewers up and remind them of their ability to help determine where American society is headed.

The Devil Came On Horseback
$17.20 Super Savings
Add to Cart

16%off
Manufacturing Consent: Noam Chomsky and the Media
$25.30 Super Savings
Add to Cart

We Steal Secrets: The Story of WikiLeaks (DVD)
$4.98 on Sale
Add to Cart