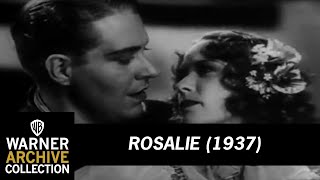 Nelson Eddy's rich baritone, Eleanor Powell's astonishing footwork and songs by Cole Porter - what more could a musical fan wish for? Wrapped in a deliciously preposterous story concerning a Balkan princess, a West Point football hero, a daring solo flight across the Atlantic, court intrigue and star-crossed romance, Rosalie lured huge film audiences with its knockout blend of top cast (including future The Wizard of Oz co-stars Ray Bolger and Frank Morgan) and magnificent music. Eddy sings two evergreen Porter songs: the haunting In the Still of the Night and the title tune, reprised to feature Powell at her most dazzling in a number that defines spectacle: a 60-acre, 27-camera, 2000-people paragon of screen-filling wow.

Baritone Nelson Eddy plays Dick Thorpe, a West Point football hero who becomes the subject of romantic passion for Vassar student Rosalie (Eleanor Powell) in this musical comedy filled with Cole Porter songs and based on the musical written by the Gershwin brothers and famed wit P.G. Wodehouse. Unfortunately, Rosalie is also the princess of the tiny Balkan nation of Romanza and set to wed a prince who is himself in love with a friend of Rosalie's. Dick flies solo all the way across the Atlantic in order to keep a date with his love, then loses hope when he realizes that she would have to abdicate her throne to marry him. But with a revolution on the way in the Balkans, anything is possible. Songs include: "In the Still of the Night," "Rosalie," "Why Should I Care," and "To Love or Not to Love," among other favorites.

Between Cole Porter songs, a West Point football hero falls in love with a Vassar student who also happens to be the princess of a tiny Balkan nation.

Adventure | Romance
This product is made-on-demand by the manufacturer using DVD-R recordable media. Almost all DVD players can play DVD-Rs (except for some older models made before 2000) - please consult your owner's manual for formats compatible with your player. These DVD-Rs may not play on all computers or DVD player/recorders. To address this, the manufacturer recommends viewing this product on a DVD player that does not have recording capability.