From waitress to Broadway star! In her first of only three films, 1920s Broadway sensation Marilyn Miller recreates one of her greatest stage hits in Sally, a lavish, heart-on-its-sleeve Cinderella story (punctuated with some color sequences). 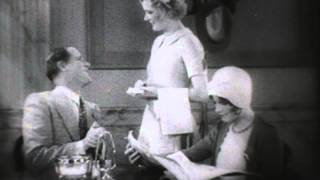 From waitress to Broadway star! In her first of only three films, 1920s Broadway sensation Marilyn Miller recreates one of her greatest stage hits in Sally, a lavish, heart-on-its-sleeve Cinderella story (punctuated with some color sequences) that showcases Miller's beauty and lyrical dancing. Also featured: Jerome Kern and Buddy De Sylva's "Look for the Silver Lining," the evergreen so associated with Miller that it became the title of her 1949 biopic starring June Haver.

Haver wasn't the only Hollywood notable to play Miller - Judy Garland took the role in 1946's Till the Clouds Roll By, giving her own standout interpretation of three Kern standards introduced in Miller shows: "Who?," "Sunny," and of course "Look for the Silver Lining."

Recreating her famous Broadway role from 1920, former Ziegfeld star Marilyn Miller took to the Warner Bros. soundstages with the energy that had made her a household name. Miller is Sally Bowling Green, an orphan named after a telephone exchange. Slaving away in a New York coffee shop, she dreams of becoming a famous dancer, a dream that keeps interrupting business. After accidentally dumping a plate of food on booking agent Otis Hooper (T. Roy Barnes), Sally finds herself once more in the employment line. She obtains yet another waitress job at the Balkan beer garden owned by amiable "Pops" Schendorff (Ford Sterling) where Connie (Joe E. Brown), the down-on-his-luck former Grand Duke of Czekoslovonia, also works. She also makes the acquaintance of socialite Blair Farquar (Alexander Gray), who has long loved her from afar. With Farquar's help, Sally proves her nimbleness on the dance floor and is hired by Hooper to impersonate Madame Noskorova, a famous Russian dancer who has eloped despite pressing engagements. Arriving at a party given by influential Mrs. Ten Brock (Maude Turner Gordon, Sally keeps up the masquerade until the hostess announces the engagement of her daughter Marcia (Nora Lane) to Blair. Hurt by the latter's duplicity, she leaves with Connie and Hooper, with Hooper arranging for her to star in the Ziegfeld Follies. On her opening night, a hugely successful Sally is reunited with Blair, who has refused to marry Marcia.
This product is made-on-demand by the manufacturer using DVD-R recordable media. Almost all DVD players can play DVD-Rs (except for some older models made before 2000) - please consult your owner's manual for formats compatible with your player. These DVD-Rs may not play on all computers or DVD player/recorders. To address this, the manufacturer recommends viewing this product on a DVD player that does not have recording capability.