A serviceman falls in love with the colonel's daughter while trying to put on a show for the troops. 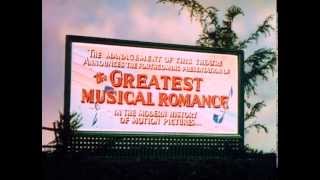 The story concerns aerialist-turned-G.I. Gene Kelly (mopping up the dance floor with a mop for a partner) romancing colonel's daughter Kathryn Grayson. But the real story is the most spectacular camp show in military history, featuring skits and songs with Judy Garland, Mickey Rooney, Red Skelton, Lucille Ball, Lena Horne, Eleanor Powell, José Iturbi and just about everybody else in Hollywood. Start cheering!!

Star vocalist Kathryn Jones (Kathryn Grayson) is doing her duty to her country--with World War II cranking up, she decides to accompany her estranged army-colonel father to his training camp to improve the enlisted men's morale. Determined not to show favoritism, she is nonetheless drawn to one of the recruits--the one with the lowest morale of all, private Eddie Marsh (Gene Kelly), no fan of this man's army. He had been the star of his circus family's trapeze act until the war made him just another soldier. Now, bitter and angry, he has to learn teamwork and discipline if he's to win the heart of the colonel's daughter.

Grayson lights up the screen with her winningly idealistic portrayal of the patriotic singer, and Kelly, in a notable early role, is brimming with characteristic insouciance and charm. The film is amply sprinkled with musical numbers, including a show-within-the-film that features acrobats, dancers, big bands, and a plethora of cameo appearances from MGM's roster of stars (including Mickey Rooney, Judy Garland, Lucille Ball, Red Skelton, and Lena Horne). Kelly is not to be outshined, however, and his signature athletic, effortless grace--on display most spectacularly in a dance with some janitorial supplies--makes THOUSANDS CHEER an unqualified delight.

A reluctant Army private falls for his colonel's daughter.