I Was a Communist for the FBI 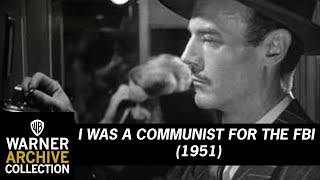 I Was A Communist For The FBI (Preview Clip)

The real Matt Cvetic was a borderline alcoholic with a nasty disposition (he once allegedly beat his sister-in-law so badly she required hospitalization). But Cvetic was also a fervent anti-communist, and so, for a brief period in the early 1950s, he was a folk hero. I WAS A COMMUNIST FOR THE F.B.I. is the semi-true story of how Cvetic (played by Frank Lovejoy) renounced his friends and family and embraced the Red cause--on behalf of the F.B.I., for whom he was a volunteer undercover agent. The film recounts how Cvetic used his job as a Pittsburgh steelworker to contact various American Communist cell leaders, and how he exposed their insidious plans to overthrow the American government. Since the script infers that among the Reds' "subversive" plans was the Civil Rights Movement, I WAS A COMMUNIST FOR THE FBI is an embarrassing experience when seen today. Cvetic's memoirs were better dramatized by a 1951 radio series of the same title, starring Dana Andrews.

Spies | Melodrama | Spy | Cold War
This product is made-on-demand by the manufacturer using DVD-R recordable media. Almost all DVD players can play DVD-Rs (except for some older models made before 2000) - please consult your owner's manual for formats compatible with your player. These DVD-Rs may not play on all computers or DVD player/recorders. To address this, the manufacturer recommends viewing this product on a DVD player that does not have recording capability.

The Iron Curtain
$19
Add to Cart