An alcoholic attorney returns to the practice of criminal law to defend a friend's kid against murder charges, but his drinking might just doom his client. 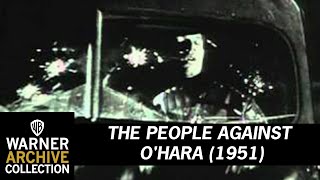 James Curtayne (Spencer Tracy) was once a brilliant defense attorney, saving scores from prison time and death row. But that was before a part of him crawled inside a bottle and never crawled out. He now practices civil law; it's safer that way. But when John O'Hara (James Arness), a kid from the neighborhood, gets hauled up on Murder One, he allows himself to get cajoled into returning to his former vocation. It's a mistake. The DA runs circles around the alcohol addled attorney, and O'Hara now faces execution. It's Jimmy's worst nightmare come true. The question is, what's he planning to do about it?

A young John Sturges (The Magnificent Seven) teams up with seasoned cinema vet Tracy for this noir-tinged legal drama, and it proves a potent combo -- a solid, by-the-numbers thriller rises above the machinations of plot to provide a compelling portrait of a very good, but very weak man in thrall to some very bad, very strong impulses.

Fish-market worker Johnny O'Hara (James Arness) is named as a suspect when his boss -- with whom he had a dispute the previous day -- is shot to death in an apparent robbery. When he's arrested, his family appeals to their old friend James Curtayne (Spencer Tracy), who was once a renowned criminal attorney but is now in civil practice. He resists their entreaties until he realizes that no decent attorney will handle the case properly; his daughter (Diana Lynn) watches with alarm, however, for we soon learn that Curtayne is an alcoholic, and that the major factor in his life that pushed him over the edge was the stress of having someone's life in his hands. He discovers soon enough just how much Johnny's life is in his hands when his client refuses to level with him about his real whereabouts on the night of the murder. He also realizes as the trial starts precisely how rusty he is in the courtroom, and the old stresses return -- and with them, his drinking. Curtayne not only manages to lose the case but destroys his career when he tries to buy off a larcenous prosecution witness. His client facing a death sentence and his own life and career in ruins, he's seemingly hit bottom, but then new evidence surfaces, of a nature that not even the ambitious prosecutor (John Hodiak) can ignore. Recognizing that his client was actually innocent and also acting in his silence -- however stupidly -- from the noblest of motives, Curtayne is willing to redeem himself by putting his own life on the line, confronting a killer who has taken more than one life without any compunction whatsoever, and who has no reason to spill anything.

THE PEOPLE AGAINST O'HARA was a well-made, largely location-shot crime drama set in New York City, but it wouldn't have been nearly so prestigious a movie were it not for the presence of Spencer Tracy in the role of Curtayne. Ironically enough, he only agreed to do the film on the condition that his friend Pat O'Brien, who hadn't been in a major studio release in a couple of years, be given a large role, which he got as the lead detective on the case, and O'Brien and Tracy get a couple of really good scenes together. The film also includes an unbilled appearance by Charles Bronson, who was still working as Charles Buchinski in 1951, and is highlighted by a superb prominent supporting performance by William Campbell, who seems to quietly relish every nuance of his portrayal of a totally slimy character.

Mystery | Courtroom | Crime
This product is made-on-demand by the manufacturer using DVD-R recordable media. Almost all DVD players can play DVD-Rs (except for some older models made before 2000) - please consult your owner's manual for formats compatible with your player. These DVD-Rs may not play on all computers or DVD player/recorders. To address this, the manufacturer recommends viewing this product on a DVD player that does not have recording capability.